The Portuguese Council for Peace and Cooperation, continuing the long standing campaign against NATO in Portugal, carried out a number of initiatives alongside other Portuguese organizations, giving these year focus on the holding of NATO’s summit in Brussels and its objectives.
The 28 Portuguese organizations that joined this year’s initiatives developed a number of actions, including distributions in cities throughout the country of the “Yes to Peace! No to NATO!” campaign documents – like a leaflet with the campaigns call – and joined in the public events held in Lisbon and Oporto on the 24th and 25th of May, affirming slogans like “Yes to Peace! No to NATO!”, “Defend the Constitution, no to NATO!”, “Yes to employment, no to war”, “Health and Education! Not NATO!”.
Adding their voice to the peace movement in Europe, to the World Peace Council and to all men and women denouncing the aggressive nature of NATO and the warmongering goals of its Brussels summit, defending the cause of peace and the principles of relations between States set down in the Portuguese Constitution and in the Charter of the United Nations, many were the activists that brought to the streets the campaign’s demands:
- No more money for NATO and war! Yes to social progress and Peace!
- End NATO's aggression and military occupations!
- End the blackmail, destabilization and wars of aggression against sovereign States, against the sovereignty, rights and aspirations of peoples!
- Support for the displaced and refugees, victims of the wars that NATO promotes and supports!
- Dismantling of the US/NATO anti-missile system and closure of military bases in foreign territory!
- Abolition of nuclear weapons and weapons of mass destruction and general disarmament!
- Dissolution of NATO!
- Compliance with the principles of the Constitution of the Portuguese Republic and the Charter of the United Nations by the Portuguese authorities, for a foreign policy in defence of national interests, security, sovereignty and independence, for peace, friendship and cooperation with all peoples of the world!
At the end of the initiative in Lisbon several organisations addressed the demonstration, the General Confederation of Portuguese Workers (CGTP-IN), the Women’s Democratic Movement (MDM), the youth organization Projecto Ruído and the Portuguese Council For Peace and Cooperation (CPPC).
http://wpc-in.org/statements/yes-peace-no-nato-defend-peace-and-security... (campaign’s call)
http://youtu.be/vfZLlr-paA0 (short video of the Lisbon demonstration)
http://issuu.com/conselho_paz/docs/folheto_sim_a_paz_nao_a_natocom_tod (campaign leaflet)

INTAL and WPC initiatives in Brussels
The Portuguese Council for Peace and Cooperation also participated in INTAL and WPC initiatives in Brussels, held in the framework of WPC’s “Yes to Peace! No to NATO!” campaign.
May 23rd INTAL held a public meeting under the banner “NATO and its wars” where the consequences of NATO’s aggression were addressed. CPPC’s member of the Presidency, Helena Casqueiro, had the opportunity to address the audience.
On May 24th CPPC participated in the WPC “Yes to Peace! No to NATO!” conference, where peace loving organizations from 15 different countries were present. The conference was followed by the participation of WPC and other friendly organizations, alongside INTAL, in the mass demonstration held in the centre of Brussels, that brought unto the streets thousands of people, where a CPPC’s delegation participated with a banner.

Speech by the CPPC’s Chairperson, Ilda Figueiredo
Yes to Peace! No to NATO! Demonstration
Lisbon, May 24th 2017
“Dear Friends of Peace
On behalf of the Leadership of the Portuguese Council for Peace and Cooperation (CPPC) I greet all those present in this rally integrated in the «Yes to Peace! No to NATO!» campaign, supported by 28 Portuguese organizations, on the same day that, in Brussels, there is a march with identical objectives and where CPPC is also represented, and a delegation of the World Peace Council.
Tomorrow, there will be an identical initiative in Oporto, on the day of the NATO summit in Brussels.
We are here, as already referred, to denounce a new military escalation of this aggressive military-political block, at the service of the US and European Union, and the main responsible for the aggression in several parts of the world, including the former Yugoslavia, Iraq, Afghanistan, Libya, Syria and other sovereign States.
We've done this in previous years, and this initiative follows many others we have developed throughout the years, I would even say since NATO was created. But I recall in particular the large demonstration in 2010 during the NATO summit in Lisbon, and the initiatives we developed against NATO military manoeuvres and, for example, the summit last year in Warsaw.
As we know, the threats to peace are enormous. And those that say they are fighting terrorism are the same that pursue the arms race and foster the growing arms business, as we witnessed recently with the US selling more armament to Saudi Arabia in the value of 110 billion Euro, when it is known that this country is responsible for supporting the proliferation of terrorism, namely in the Middle East.
Therefore, it is important to denounce the threats to peace, be they in the Middle East, in Africa and in Central Asia, or also in Latin America, not forgetting Venezuela, also a victim of encroachment and blackmail increasingly recalling what occurred in the fascist coup of 1973 in Chile, or more recently in the Ukraine. And what is occurring with the reinforcement of the aggressive anti-missile shield and the thousands of US and NATO troops and armament recently sent to Eastern European countries, near the border of the Russian Federation, as well as the the Mediterranean Sea and Asia-Pacific region with the proliferation of US and NATO aircraft carriers and nuclear submarines, in what is a permanent provocation to the sovereignty of peoples and world peace, demanding increasingly more money from member-States, even when they refer there are no conditions to improve wages, social benefits and the social functions of the State.
Therefore, as we said during the march: No to the increase in military spending for war; money should be used for social progress and peace. We want the fulfilment of the Portuguese Constitution, as we have defended in the five Concerts for Peace the CPPC organized this year, in Oporto, Gaia, Lisbon, Viana do Castelo and Coimbra, involving thousands of people. And we will always say: Yes to Peace yes! No to War!
We want an end to blackmail, destabilization and wars of aggression against sovereign States and peoples. We want the closure of foreign military bases, we salute what happened recently in Japan, where thousands of people demonstrated against the new US military base planned for Okinawa. We want the abolition of nuclear weapons and weapons of mass destruction and general disarmament, as well as the dissolution of NATO, respecting the Portuguese Constitution.
Therefore, let's continue to chant: «Yes to Peace! No to NATO!»
The struggle for peace continues.” 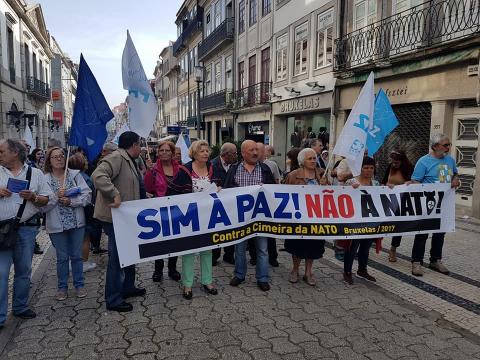 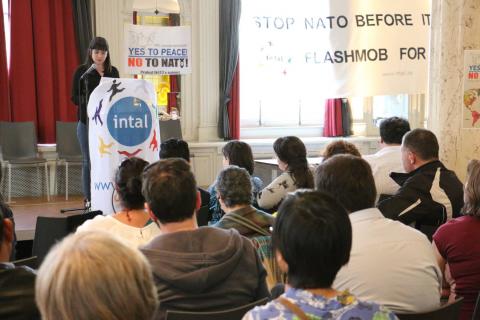 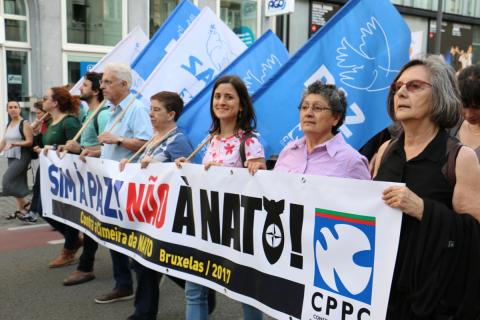 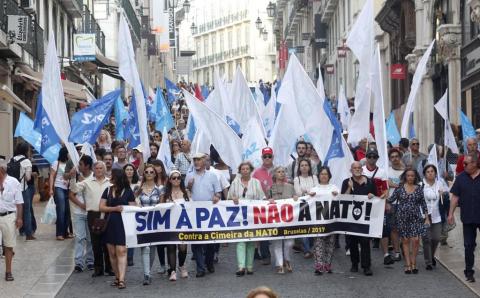