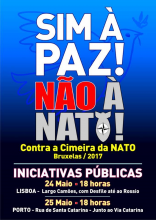 The Portuguese Council for Peace and Cooperation and other Portuguese organizations are developing a number of initiatives denouncing NATO's and its Brussels summit, throughout Portugal, that will culminate in street initiatives in Lisbon and Oporto on the 24th and 25th of May respectively.
In the text cosigned by the Portuguese organizations "Yes to Peace! No to NATO! - Defend peace and security in the world! No to the warmongering objectives of the NATO Summit in Brussels!" they join their voice "to the peace movement in Europe, to the World Peace Council and to all men and women who denounce the aggressive nature of NATO and the warmongering goals of its summit, to be held in Brussels on May 25", and state their demands for the dissolution of NATO, the end of the arms race and all weapons of mass destruction, the use of money for social progress and peace instead of war, amongst other demands.
Read the full text bellow:

Peace! No to NATO!
Defend peace and security in the world! No to the warmongering objectives of the NATO Summit in Brussels!

NATO is a political-military bloc responsible for wars of aggression against sovereign States and its huge legacy of death, suffering and destruction, including the tragedy of tens of millions of displaced people and refugees, many of them women and children, the main victims of human trafficking networks.
NATO and its members intervened directly or supported military interventions in countries in Europe, the Middle East, Africa and Central Asia - interventions always carried out under false pretences and widespread campaigns of misinformation and deception. NATO bombed Yugoslavia and is responsible for the war that today marks the reality of Afghanistan, Iraq, Libya, Syria or Ukraine.
The US, which has increased its military spending by 54 thousand million dollars, and NATO, whose member countries are already responsible for most of the world's military spending, demand increased spending for its warmongering action.
The US and NATO are promoting a race to increasingly more sophisticated armaments, including nuclear weapons and the installation of the offensive anti-missile system in Europe and Asia, with which they seek to ensure their military supremacy, which includes its growing military presence in Eastern Europe, and the vast network of foreign military bases, naval fleets and global surveillance systems scattered throughout the world.
When unacceptable sacrifices and severe regressions in the living conditions of the workers and peoples are demanded in many countries, there is no shortage of money for NATO, the arms race and war.
The European Union assumes itself as the European pillar of NATO, promoting its increasing militarization and its interventionism, be it in Africa, the Middle East or Eastern Europe.
NATO is a military instrument of the US, through which it continuously seeks to associate countries with its goal and strategy of world domination.
NATO is an instrument of aggression and war and the main threat to peace in Europe and the world.
NATO's warmongering action fuels an escalation of tensions, destabilization and aggression which hold the real threat of a widespread war, with the danger of a nuclear confrontation that would mean the destruction of Humanity.
But war is not inevitable! The forces of Peace, the workers and the people have a say!
The Portuguese people, at important moments, expressed their clear option for Peace and against the participation of Portuguese forces in aggressions against other peoples. A wish that was not respected by successive governments that gave their support to NATO actions, including its wars of aggression, and spent millions of euros with the adaptation of the Portuguese armed forces to the requirements of NATO and to serve its military adventures.
Portugal should not be involved in NATO's warmongering intentions which pose a threat to world peace and security! There must be respect for the aspirations for peace of the Portuguese people!
The arms race, the strengthening of NATO and the militarization of the European Union, the militarization of international relations, interference and aggression, the so-called NATO-led "war on terrorism", that only led to more terrorism, could only bring more conflicts, more war, more insecurity.
Peace and security - a right and an aspiration of the peoples - can only be effectively ensured following the path of: general and controlled disarmament; dissolution of the political-military blocs; abolition of imperialism, colonialism and all other forms of aggression, domination and exploitation; respect for sovereignty, independence, equal rights, cooperation and the peaceful settlement of conflicts between States - principles enshrined in the Constitution of the Portuguese Republic.
Defending the cause of peace and the principles of relations between States set down in the Constitution of the Portuguese Republic and in the Charter of the United Nations, the signatory organizations call for participation in the actions of opposition to NATO, for the dissolution of this political-military bloc, namely in Lisbon, on May 24, and in Oporto, on May 25.
Adding their voice to the peace movement in Europe, to the World Peace Council and to all men and women who denounce the aggressive nature of NATO and the warmongering goals of its summit, to be held in Brussels on May 25, the signatory organizations demand:
- No more money for NATO and war! Yes to social progress and Peace!
- End NATO's aggression and military occupations!
- End the blackmail, destabilization and wars of aggression against sovereign States, against the sovereignty, rights and aspirations of peoples!
- Support for the displaced and refugees, victims of the wars that NATO promotes and supports!
- Dismantling of the US/NATO anti-missile system and closure of military bases in foreign territory!
- Abolition of nuclear weapons and weapons of mass destruction and general disarmament!
- Dissolution of NATO!
- Compliance with the principles of the Constitution of the Portuguese Republic and the Charter of the United Nations by the Portuguese authorities, for a foreign policy in defence of national interests, security, sovereignty and independence, for peace, friendship and cooperation with all peoples of the world !