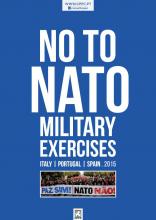 NATO, a bellicist alliance, an extension of US military power and which acts according to its interests, will hold in Portugal, Spain and Italy from the beginning of October to November 6, 2015, vast military exercises involving more than 36 000 troops from all branches of the armed forces from member states of this alliance and 7 other "partner countries".

Considered one of NATO’s largest ever military exercises, they take place following US and NATO military exercises in various regions of Europe: Baltic Sea, Eastern Europe (Estonia, Latvia, Lithuania, Poland, Ukraine), Black Sea - and are seen as a clear and continuing demonstration of hostility against the Russian Federation. It should be recalled that NATO declared the aim to create a permanent response force of around 13,000 to 30,000 soldiers and a high readiness force consisting of 5000 soldiers. According to NATO’s Strategic Concept adopted at the Lisbon Summit in 2010, the operation of these forces would not be limited to the territories of the organization's countries. One of the goals announced for these military exercises is to test the capacity for this bellicist foreign intervention by NATO in the Mediterranean, in North Africa (recall NATO's aggression on Libya and the recent decision to use the US military base of Morón de la Frontera, in Spain, as the main base of the United States Africa military command - AFRICOM) and in the Middle East.

The Portuguese Government has already deployed some military units of the armed forces to be involved in these exercises. The complicity of the Portuguese authorities with this alliance with bellicist aims collides with the fundamental principles enshrined in the Portuguese Constitution and the United Nations Charter: respect for the sovereignty and independence of States, non-interference, non-aggression, peaceful resolution of conflicts and equality in relations between states; abolition of imperialism, colonialism and any other forms of aggression, domination and exploitation, for disarmament and dissolution of political-military blocs.

At a time when in many countries, including Portugal, unacceptable sacrifices and social regression are imposed on the citizens and broad sections of the population are thrown into poverty, NATO aims to increase military spending and relaunch the arms race, an example of which is the dangerous installation of the US anti-missile system in Europe (recall that the military budgets of its member countries represent by far the largest share of total global military spending which in 2014 amounted to 1.8 thousand million dollars).

It is necessary to say no to these military exercises and Portugal’s involvement in them.
It is necessary to demand the dissolution of NATO.
It is urgent to build a future and a world of peace with rights and prosperity.

For Peace, all of us are not too many!

National Board of Directors of CPPC"