The Portuguese Council for Peace and Cooperation participated in the demonstration «No to NATO | No to wars | For Peace | Out the bases | No to the militarist budget” which took place in Madrid on June 26.

The CPPC took part in the demonstration, parading with the Yes to Peace! No to NATO! banner and its flags, along with other member organisations of the World Peace Council (WPC).

This demonstration was part of a series of initiatives that took place in Madrid against the NATO Summit that was held on June 29 and 30.
The CPPC accepted the invitation of the Spanish Committee for the Defence of Solidarity and the Struggle for Peace (CEDESPAZ) not only to participate in this demonstration, but also in the panel on the theme: «Alternatives for a collective and non-militarised security», within the context of the No to NATO Summit, which took place on June 24 and 25, also in the Spanish capital.

In his speech Eduardo Lima, a member of the National Board of the CPPC, reaffirmed, among other aspects, the rejection of the path of militarism and war, the need for the dissolution of political-military blocs, hence of NATO - namely giving continuity to the "Yes to Peace! No to NATO!" campaign – and the importance of building a collective security system based on the principles of the United Nations Charter.

And so, the CPPC joined the appeal, together with CEDESPAZ and the WPC, to participate and support the actions that would be carried out against NATO in Madrid, launched at the meeting of WPC member organisations from the European region, held
in November 2021, in Gaia.

In Portugal, the CPPC, together with other entities, was engaged in holding parades in Lisbon, on June 25, and in Porto, on June 29, joining the Appeal "Yes to Peace! No to War and to the arms race!" signed by dozens of Portuguese personalities and
organisations, and where the CPPC participated, also giving expression to the campaign "Yes to Peace! No to NATO!"

Intervention of the CPPC in the panel on the theme: «Alternatives for a collective and non-militarised security»

First and foremost, please allow me, on behalf of the Portuguese Council for
Peace and Cooperation, to begin by expressing our warmest greetings to all
those present and, specially, to CEDESPAZ, whom we thank for the invitation to
participate in this important initiative. rejecting the path of militarism and war,
rejecting NATO and affirming peace, friendship and cooperation with all
peoples.
The counter-summit we are holding here takes place in a context of worsening
interference and aggression, of an arms race, of war, where NATO's militaristic
and aggressive objectives stand out. A reality that highlights the heightened
importance of this counter-summit. We consider fundamental the convergence
of all those who defend and affirm peace and disarmament as the alternative
path to war, as the path that truly serves the interests of the peoples of Europe
and the entire world.
The situation in Europe and in the world is characterised by an escalation of
war, militarism, arms race, which poses serious dangers that threaten
Humanity. This has been a path in which the United States of America and its
allies, including NATO and the EU, have assumed a leading role.
They are mainly responsible for the increase in military spending, for the race
for new, even more sophisticated and destructive weapons – namely nuclear
weapons – for the escalation of interference, threats, provocations,
destabilisation operations, imposition of sanctions and blockades and military
aggressions against the peoples and countries that dare to assert their
sovereignty and their rights, for disregarding the principles of the United Nations
Charter and international law; in short, they are those mainly responsible for a
dangerous situation that can lead to the beginning of a conflict of great and
serious consequences for Humanity.
Contrary to what some claimed, the new US administration, led by Biden,
despite tactical and circumstantial differences, essentially maintained its
strategy of seeking to impose US global hegemony, exemplified in its efforts to
expand military alliances and partnerships beyond NATO, such as AUKUS or
QUAD, for the continuation of aggressions and the imposition of blockades, for
the intensification of the policy of confrontation against China and Russia,
pinpointed as the strategic adversaries of the US.
The current situation in Eastern Europe testifies precisely to the intensification
of this policy of confrontation: decades of NATO advance towards the borders
of the Russian Federation – with bases, forces, naval fleets, military exercises –
culminated in the escalation of the conflict that is currently taking place. It is
urgent to reverse the course of provocation, militarisation and confrontation that
has been going on for a long time in that region.
And contrary to what is imperative for the construction of peace, in Europe and
in the world, we have been witnessing the militarisation of the European Union
with the "Permanent Structured Cooperation"(PESCO), the creation of a so-called "European Defence Fund" the implementation of a programme for the
development of the arms industry, or with the so-called “battle groups” of the
EU, which implies not only the use of more EU financial resources for its
warmongering policy, but also the increase in military spending in each of the
countries that comprise it.
The militarisation of the EU and the creation of the so-called “European army” is
a process that – not without contradictions – converges with US foreign policy,
with the EU assuming itself as the European pillar of NATO and its militarisation
as a complement to this aggressive political-military bloc.
At the beginning of this year, steps were already taken in this direction with the
adoption of the so-called "strategic compass" of the European Union, that is, the
proposal of a strategic concept that intends to relaunch the autonomous
strategic capacity of the EU's military intervention and that will be articulated
with the objectives defined in NATO's next strategic concept, which will be
adopted during the Summit to be held here in Madrid.
The militarisation of the European Union, in coordination with NATO, is not a
step towards the defence of peace, on the contrary, it represents more
militarism, more military spending, increasing interventionism and the threat of
war.
The militarisation of the EU, whether complementary to NATO, constitutes a
threat to Peace that has to be stopped To this end, the information and
mobilisation of all those who defend peace are crucial.

This coming NATO Summit intends to enhance the path followed until today At
stake will be the significant increase in military spending by NATO members, its
enlargement to Sweden and Finland and the continuation of the war in Ukraine,
inserted in the US Administration's strategy of attrition of Russia. At the same
time, an attempt is made to shut the path of negotiation and dialogue with a
view to a negotiated solution to the conflict.
Portugal's association with NATO's aims and the militarisation of the EU means
yet another step in the subordination and conditioning of its foreign policy to
NATO and the EU.
It should be recalled that the Portuguese fascist dictatorship was one of the
founding members, in 1949, of NATO, which has always been an instrument of
war and domination to serve the economic, political and geo-strategic interests
and objectives of the United States of America.
But the end of NATO and the construction of a collective security system based
on the United Nations Charter is also a constitutional imperative that any
Portuguese government should pursue.
In its article 7, the Constitution of the Portuguese Republic, itself an
achievement of the April Revolution, states that “Portugal advocates the
abolition of imperialism, colonialism and any other forms of aggression,
domination and exploitation in relations between peoples, as well as general,
simultaneous and controlled disarmament, the dissolution of political-military blocs and the establishment of a system of collective security, with a view to
creating an international order capable of ensuring peace and justice in
relations between peoples. ”
It is for the construction of an alternative path to war, of peace and solidarity
and friendship among peoples that today's counter-summit and tomorrow's
demonstration are so important, showing that the forces upholding peace are
united and determined in denouncing and mobilising against militarism, war and
all forms of aggression in international relations.
Two parades in defence of peace are scheduled for Portugal - today, June 25,
in Lisbon, and on the 29 th . in Porto - promoted by several personalities and
organisations and which will be two important moments of defence of peace,
where a clear appeal will be made to the Portuguese authorities so that “they do
not contribute to the escalation of confrontation and war, but rather to the
creation of conditions for dialogue that ensure the establishment of a climate of
trust, with a view to creating a system of collective security, an international
order capable of ensuring peace and justice in relations among peoples.”
Friends,
It is urgent to:
- demand an end to the militarisation of the EU and its interference missions in
various countries;
- say no to NATO and demand its dissolution;
- say no to the arms race and demand a cut in military spending and the
abolition of nuclear weapons and other weapons of mass destruction;
Continuing the campaign "Yes to Peace! No to NATO!", started in 2010, the
CPPC will continue persistently, converging with all organisations and activists
that defend the cause of Peace, to promote actions against the militarisation of
the EU and NATO.
It has never been so important to uphold the principles of the United Nations
Charter and international law, the right of peoples to self-determination, national
sovereignty and independence, the peaceful settlement of international
conflicts, universal, simultaneous and controlled disarmament, the dissolution of
political-military blocs, cooperation among peoples and countries for the
establishment of a system of collective security, with a view to creating a new
international order of peace and social progress.
It is urgent to strengthen the struggle for Peace and mobilise all peace-loving
forces to defend these principles and aspirations – you can count on the CPPC
for this fair and necessary struggle. 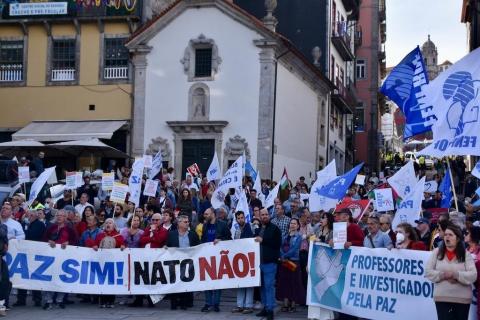 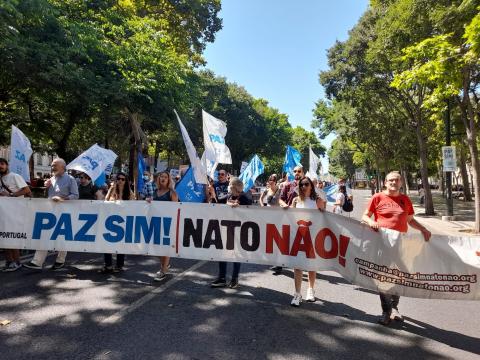 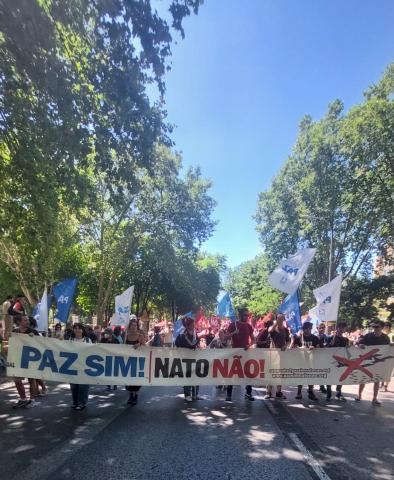