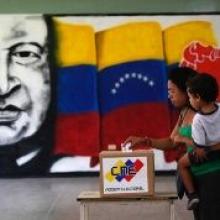 Upon the invitation of the National Elections Council of Venezuela (CNE), a World Peace Council (WPC) delegation visited the country and attended as international observer for the December 6, 2020 Parliamentary Elections. It has been an inspiring opportunity for us witness to one of the most democratic and free elections in the world.

After repeated coup attempts, sabotages, intrigues and an anti-human blockade by U.S. and European Union imperialist states and their reactionary allies in Latin America (Lima Group), aimed at delegitimizing and overthrowing the Bolivarian Revolution and Government of Venezuela in Simon Bolivar’s home land, the revolutionary people of Venezuela proved, once again, that they still firmly defend the right to decide their internal matters alone, in the face all imperialistic, anti-democratic and anti-human pressures and foreign interference.

On December 6th, our delegation was able to observe the voting process in many voting centers throughout Caracas. What we witnessed in every one of these centers was long lines of very enthusiastic people eagerly waiting to vote, and an extremely dedicated and helpful electoral staff, which went out of its way to help citizens cast their votes in the most efficient and transparent way, while, at every step, taking all precautionary steps to protect the voters’ health against COVID-19 virus. This election was a clear manifestation of mass participation and diversity of the parties involved. It was a true rejection of all false claims, especially made by the United States Government, about “presidential dictatorship” and “lack of democracy” in Venezuela.

We leave this land of Simón Bolivar and its people fully assured that the people of Venezuela, with the support and solidarity of all anti-imperialist and peace-loving forces throughout the world, will be able to continue the struggle against the policies of imperialism and of the local oligarchy, and will deepen the transformations so that the people will be the rightful master and owner of their wealth and destiny.

Once again, we express our deep internationalist solidarity with the heroic people of Venezuela and their mass organizations and thank the Institute Simon Bolivar - ISB and the WPC member Committee for International Solidarity and Struggle for Peace-COSI, for their warm hospitality.

— Luis Cisneros, Movement for Peace and Development of Mexico