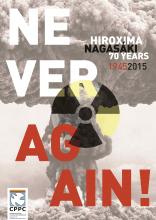 70 Years of the nuclear bombing of Hiroshima and Nagasaki

On August 6 and 9 70 years will have passed on the nuclear bombing against the Japanese cities of Hiroshima and Nagasaki by the United States of America. On this occasion the Portuguese Council for Peace and Cooperation (CPPC) recalls the barbaric act committed against defenceless populations at a time when the Japanese empire was already military defeated on land in Asian front and on the Pacific air and sea fronts. Japan had already started the process of surrendering to the Allied Forces.

The nuclear bombing of the two Japanese cities – without any importance for the outcome of the war – were above all else a terrifying demonstration of USA's military might. By its own nature the nuclear weapon is not intended to be used in the battlefield, but against civilian population and against urban and industrial centres.

Beyond the 250 thousand deaths that occurred immediately and in the first following days, the atomic bombing left an inheritance of serious effects on neighbouring populations: the proliferation of cancer and genetic illnesses that still persist after 70 years, due to the exposure to ionizing radiations and radioactive substances.

Terrified by what undoubtedly was on of the biggest crimes ever committed, the peoples of the world united to prevent such tragedy from repeating, making Stockholm's Appeal (launched in 1950) a gigantic demonstration against nuclear weapons. Considering that the present day nuclear arsenal is infinitely larger and more powerful, the use of such weapons would imply the destruction of mankind and civilization.

At a time when millions of human beings are faced with the regression of their living conditions and the loss of rights, military expenditure in 2014 reached 1800 billion USD, a considerable amount of which in the maintenance and modernization of nuclear weapons.

Reaffirming its commitment to the construction of a world of justice and Peace, CPPC pays homage to the victims of the nuclear weapons in Hiroshima and Nagasaki and demands:

-That never again the nuclear holocaust be repeated;

-The abolition of nuclear and mass destruction weapons and a general and controlled disarmament;

-The fulfilment of the principles of the Portuguese Constitution and of the United Nations Charter, concerning the respect for international law, for the sovereignty of states and peoples equal rights.

CPPC's National Board of Directors