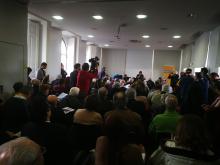 With the approaching of the Global Day of Action in Solidarity with the People of Venezuela, April 19th, the Portuguese Council for Peace and Cooperation divulges recent actions and positions in solidarity with Venezuela it developed in Portugal.

The session of solidarity with the Bolivarian Republic of Venezuela, promoted by CPPC, on Tuesday, April 10, 2018, at the Bento de Jesus Caraça Professional School, in Lisbon, with the presence of the Minister of Popular Power for the External Relations of the Bolivarian Republic of Venezuela, Jorge Arreaza, constituted another demonstration of the firm and constant solidarity of the Portuguese peace movement with the process of emancipation and liberation initiated almost 20 years ago in that South American country, following the victory of Hugo Chavez in the presidential elections of 1998. It was also an important moment of clarification and understanding of the present situation in Venezuela and of future perspectives.

With an overflowing room and the presence of organizations and movements that, independently of media pressures and campaigns, never wavered in their support for the people of Venezuela and the Bolivarian process, the event also counted on the presence of the ambassador of Venezuela, Lucas Ríncon, the ambassador of Cuba, Mercedes Martinez, the ambassador of Palestine, Nabil Abuznaid, and the ambassador of the Dominican Republic, Héctor Virgilio Alcántara Mejía, presences that showed, once again, that solidarity is not a mere word. It is a daily and reciprocal practice, as underlined in the afternoon’s first intervention by the chairperson of CPPC, Ilda Figueiredo, who highlighted the political, economic, social, and cultural achievements of the Bolivarian process initiated with president Hugo Chavez and followed by president Nicolás Maduro, a process that contributed to the creation of new experiences affirming the sovereignty and union of the peoples of the region, such as CELAC, UnaSur, ALBA, where Venezuela had an important role along with Cuba, Brazil, and other countries. And therefore, solidarity was also expressed towards other peoples of the region, namely Brazil and Cuba.

For Jorge Arreaza, expressing solidarity with Venezuela is not easy today, given the dimension and violence of the media offensive against the Bolivarian Revolution. It is an act of bravery, of courage. A project of emancipation and liberation in a country so rich and so close to the United States of America could not be easy, and hasn’t been. But, the minister underlined, it has been possible because of the fidelity to the path indicated by Hugo Chavez, whose dimension, he guaranteed, is not yet completely within reach.

Jorge Arreaza also denounced the U.S. threats of military aggression against Venezuela and the anti-patriotic character of the oligarchic opposition, which obeys external interests against the country’s sovereignty and the people’s well-being.

He also referred to Brazil, condemning the imprisonment of Lula da Silva, a further step in the institutional coup that ousted president Dilma Rousseff, speaking with enthusiasm of the progressive changes that occurred in his country and several others in Latin America, not forgetting Ecuador, Nicaragua, Bolivia, and the determination of the Venezuelan people to continue to face boycotts and interference from the U.S. and its allies in order to reestablish hegemony in Latin America and call into question the achievements all peoples and their right to be happy.

In Defense of the Venezuela's Sovereignty

The Portuguese Council for Peace and Cooperation (CPPC) denounces the operation of interference conducted against the Bolivarian Republic of Venezuela this weekend, promoted in coordination by several countries, under the leadership of the US, in collusion with internal sectors of its oligarchy. The aim of this economic, political, diplomatic and media campaign against the Venezuelan democratic institutions, including its legitimate President and Government, is to degrade the social conditions of that country, seriously harming broad sectors of Venezuelan society, including a vast Portuguese community.

This is an additional episode in a violent and constant aggression against the progressive Bolivarian process, as old as this process itself. Since 1998, when commander Hugo Chavez won the presidential elections, that the Bolivarian oligarchy and successive US governments have sought by all means to invert the path that ensured important political, economic and social achievements: coups, terrorist action, the boycott and economic and financial blockade, the attempt of political isolation were —and are— marked aspects of this offensive.

Reaffirming its solidarity with the Venezuelan people and the Bolivarian democratic and patriotic forces, CPPC demands an end to the economic boycott and the sanctions against the Bolivarian Republic of Venezuela and to all form of foreign interference in affairs that pertain only to Venezuelans.

The Portuguese Council for Peace and Cooperation (CPPC) expresses its repudiation for the intensification of the campaign and manoeuvres of interference against the Bolivarian Republic of Venezuela, which occur following the scheduling of the presidential election in that country, announced for April 22nd. (Since the publication of this article postponed for May 20th)

Examples of this new increase in interference are: the grave statements by the US State Secretary when he defended, recently, that the military could overthrow the democratically elected president Nicolás Madura with a coup d’état; the resolution, approved in the European Parliament, where once again and unacceptably, it meddles in the internal affairs of Venezuela, appealing for more sanctions against Venezuela and its people, subscribing the positions of the coup forces and openly supporting forces and individuals responsible for acts of terrorist violence in Venezuela; or also, the announced preliminary analysis on the possibility of investigating events in Venezuela during 2017, by the so-called International Criminal Court.

Condemning these additional foreign campaigns and manoeuvres aimed at worsening the economic and financial blockade and political isolation imposed by the US upon Venezuela —path that has harmed the Venezuelan people and the numerous Portuguese community residing in Venezuela— CPPC salutes the Venezuelan people and their will to pursue a path of peace, national sovereignty, democracy, development and social progress. 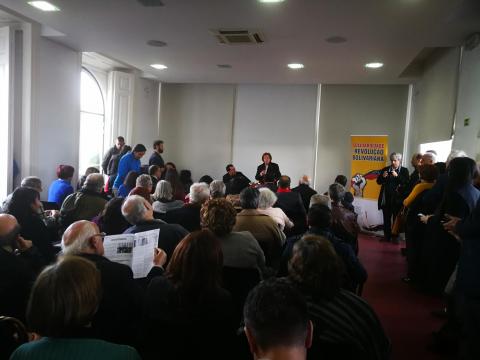 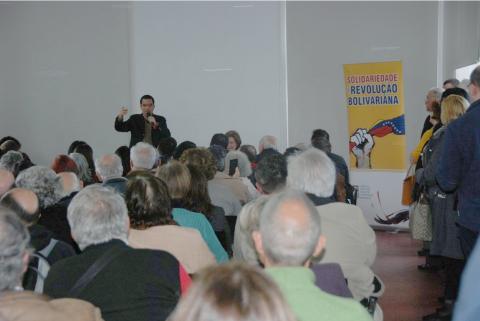 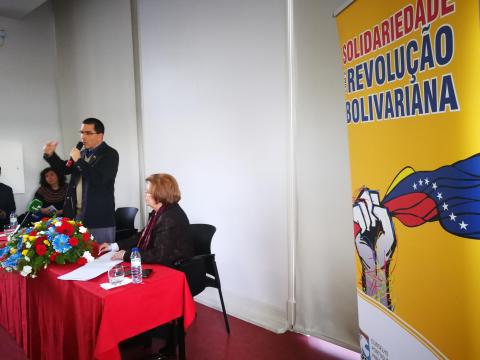