Build and Expand the WPC Campaign – Yes to Peace! No to NATO!
APPEAL & POSTERS

The 2016 NATO Summit will take place July 8-9 in Warsaw, Poland. It comes as NATO undertakes its “biggest collective reinforcement” of the past 2 decades. The World Peace Council is calling for mobilizations in all countries of the world, to coincide with the Warsaw Summit and to build the ongoing global campaign against NATO – Yes to Peace! No to NATO!

NATO: an enemy of peace and the people

Since its creation in 1949, NATO has been an aggressive military arm of imperialism. It is the largest and most dangerous military organization in the world, deeply interconnected with the foreign and economic policies of both the United States and the European Union.

Since the 1990’s, NATO has expanded its membership and theater of operations. NATO currently has 28 member states across North America and Europe. Another 22 countries are engaged in the Euro Atlantic Partnership Council (EAPC). A further 19 countries are partnered with NATO through programs such as the so called “Partnership for Peace”, “Mediterranean Dialogue”, the “Istanbul Cooperation Initiative” or the “Partners across the Globe Initiative”.

This expansion alone reveals NATO’s fundamental purpose: to be a key tool of imperialist domination of the globe.

Over the past 2 decades NATO and its affiliates have attacked Yugoslavia (and its province Kosovo), Afghanistan, Iraq, Libya, and Syria with the obvious goal of overthrowing these countries’ governments. In most of these cases the government was targeted by NATO because it refused to accept the dictates of US or EU foreign and economic policy. In none of these cases has the goal or result been democracy and peace – the only legacy is death for the people, destruction and displacement-with increased power control of resources and profits for NATO states.

NATO pressures its members to increase their national military budgets, whiole creating austerity for social programs, to further integrate their military, and to provide funding for more arms development, including nuclear weapons. The cooperation and coordination with the EU has been formalized through the various EU treaties and the creation of the EU-army.

In 2014 the United States and the European Union generated the violent overthrow of Ukraine’s government – partly by organizing, arming and equipping neo-Nazi storm troopers – and replaced it with an EU/US client regime, used to politically and economically dominate Ukraine and its strategy against the Russian Federation. In the face of violence and fascism, people of eastern and southern Ukraine took action to protect their lives, cultures and history, communities and interests, with Russian support. NATO used this as a pretext to increase military activities and expand its bases in every country throughout Eastern Europe and the Arctic, right to Russia’s borders. At the same time all EU governments have imposed and maintain economic and political sanctions against the Russian Federation.

NATO’s actions, as the favored military tool of US and EU imperialism, have led to ongoing climate of confrontation between the major nuclear-armed states. Such provocations lead inevitably to escalating tensions and the real threat of a nuclear confrontation and a generalized war that unavpidedly would destroy all civilization across the planet.

For a stronger, expanded campaign:

The World Peace Council has an ongoing campaign – Yes to Peace! No to NATO! – that has produced and supported large conferences, mass popular demonstrations and sustained campaigns in many countries. Through this campaign, the WPC has worked with numerous European and North American peace forces who also oppose NATO’s aggressions and existence. The Yes to Peace! No to NATO! Campaign calls for the dissolution of NATO at a global level, supports the struggle against NATO in each of its member states, and promotes the right of the people in each country to unilaterally withdraw from the NATO military alliance.

The struggle for peace and against war is an integral part and a necessary condition for progress and social justice.

In an effort to build and expand this campaign over the coming period, the World Peace Council commits itself to the following:

1. Working with its affiliate organizations and regional coordinators, the WPC will continue to call, organize and mobilize global days of action demanding the dissolution of NATO. The WPC will work to organize these actions on an annual basis. In an effort to build mass, public demonstrations against NATO, the WPC will reach out to international peace, labor and progressive forces who agree that NATO should be dissolved. The WPC will encourage its affiliate organizations to conduct similar outreach, wherever possible, at the national level.
2. Working with its affiliate organizations the WPC will organize international conferences to expose the operations of NATO to inform the peace loving forces and the broader public of NATO’s actions and of popular efforts to block them and to develop proposals for new and creative means to mobilize actions, especially in the NATO members states, unmasking its imperialist nature, denouncing the responsibility of each member state government and demanding NATO’s dissolution.
3. The WPC will increase its work with its affiliate members in NATO states, to support and encourage their national campaigns against NATO. As part of this, the WPC will continue to promote the right of each people to unilaterally withdraw from NATO, as a concrete act to weaken the military alliance.
4. The WPC will work with its affiliate members to encourage and promote resolutions, calls and actions by those governments to the United Nations and other relevant international bodies calling for the dissolution of NATO. This is a particular focus for affiliate members in countries in the Non Aligned Movement.
5. In order to develop and realize the above proposals, the WPC will make a progress report to each Secretariat, Executive Committee Meeting and each World Peace Assembly.

In preparation for the Warsaw Summit, the World Peace Council recognizes the increasing global threat represented by NATO – by its increasing belligerence, size and geographic reach without limit. The WPC affirms that it will raise the mobilization in the streets of cities and countries to mobilize the people to struggle against NATO for its total dissolution, by calling for a global mobilization of action against NATO on July 8-9, 2016.

The WPC and its affiliates will urge peace and solidarity movements to organize protests at the Warsaw Summit site. Such a direct presence on the spot is a powerful reminder to all that NATO is the enemy of the peoples of the world and is actively opposed by them and demand:

It is also critical to mobilize in each country, with multifaceted actions and protests, conferences and educational events, printed and digital materials. This is particularly important in countries who are members of NATO, where the WPC is underlining also the role of those governments who support and endorse all NATO plans and actions.

Please inform the WPC as soon as possible of events in your country or region, and forward copies of promotional material.

On July 8-9, the peoples of the world say 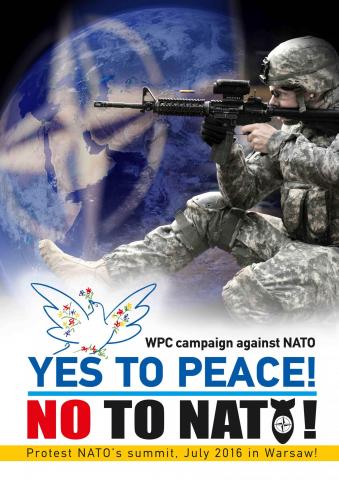 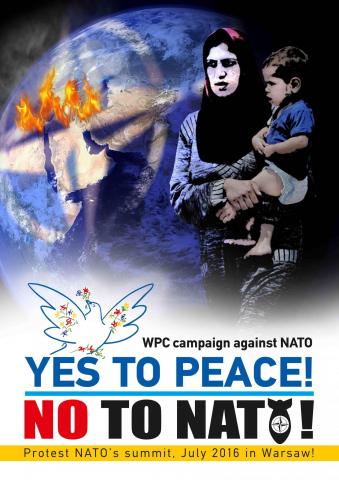