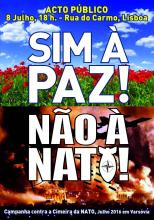 The Portuguese Council for Peace and Cooperation and other mass organizations have been promoting several initiatives in Portugal denouncing NATO and the warmongering goals of its Warsaw summit. The initiatives have included the production and public distribution of several materials like posters, leaflets and a newspaper.
Leading up to the date of the summit several public initiatives will take place in different cities throughout the country namely in the on the 8th of July in Lisbon and on the 9th of July in Oporto.

Protest against NATO Summit in Warsaw

The North Atlantic Treaty Organisation (NATO) the largest military organisation in the world, a tool of US intervention, defined the EU as its European pillar.

Since the last decade of the past century, with its enlargement to Eastern Europe and the expansion of its multiple “partnerships”, the US and NATO have strengthened their military presence in Europe and projected the offensive action of this military-political bloc, electing the entire planet as its area of intervention.

In Europe, NATO continues to increase its military activities and the expansion of its bases, increasingly approaching the borders of the Russian Federation.

The vast network of foreign military bases, naval fleets, the anti-missile and global monitoring systems that the US and its NATO allies have all over the world are instruments of its strategy of world domination.

As is well known, NATO and its members intervened directly or supported military interventions in countries of Europe, Middle East, Africa and Central Asia. NATO bombed Yugoslavia and is also responsible for the destabilisation, violence and war that today mark the reality of Iraq, Libya, Syria, Afghanistan or Ukraine. Contrary to what was announced in vast campaigns of deception, none of these interventions’ purpose or aim was democracy or peace for their people, instead it was death, destruction, the tragedy of millions of displaced people and refugees, as well as an increasing domination of its resources by large companies from NATO member countries.

NATO member countries, especially the US, are responsible for the bulk of military spending in the world and the race for increasingly sophisticated weapons, including nuclear weapons. NATO pressures its members to increase their military budgets. For NATO there is no lack of money for war, while at the same time, policies are promoted against the rights and living conditions of workers and people in many of its member countries.

As has been warned, this warmongering action feeds an escalation of tensions and holds a real threat of a widespread war, with the danger of a nuclear confrontation that would mean the destruction of civilization all over the planet.

NATO is the main threat to Peace in Europe and the world. But war is not inevitable! The forces of Peace, the workers and the people have a say!

The Portuguese people, in important moments, expressed their unequivocal option for Peace and against the participation of Portuguese forces in aggression against other peoples – a will that has not been respected by successive governments that have given their support to NATO’s actions, including its wars of aggression, and spent millions of euros to adapt Portuguese armed forces to NATO’s requirements and to serve its military adventures.

Portugal should not be involved in NATO’s warmongering purposes which pose a threat to international peace and security.

We have to respect the aspirations for peace of the Portuguese people! We must comply with the principles enshrined in the Portuguese Constitution: disarmament, dissolution of political and military blocs; abolition of imperialism, colonialism and any other forms of aggression, domination and exploitation; sovereignty, independence, non-interference, non-aggression, peaceful resolution of conflicts, equality between states, cooperation.

Hence, the signatory organisations defending the cause of Peace and the principles guiding the relations between States set down in the Portuguese Constitution and the United Nations Charter, call for the holding of actions of opposition to NATO, the dissolution of this political-military bloc - particularly on 8th and 9th July 2016, during the holding of the NATO Summit in Warsaw.

Thus, and joining its voice to the movement of Peace in Europe, the World Peace Council and all those who denounce the aggressive nature of NATO and the warmongering goals of its Summit in Warsaw, the signatory organisations make a call to demand:

Withdrawal of all NATO forces engaged in military aggression;

End of blackmail, destabilization and wars of aggression against sovereign States;

Support to refugees, victims of wars that NATO promotes and supports;

Closure of military bases in foreign territories and the dismantling of the US/NATO anti-missile system;

General disarmament and abolition of nuclear and mass destruction weapons;

That the Portuguese authorities comply with the principles of the Portuguese Constitution and the United Nations Charter, respecting the sovereignty and equality of peoples and States.

We say Yes to Peace! No to NATO!

Co-signing organisations (up to now)

-Portuguese Council for Peace and Cooperation

-Portuguese Confederation of Social Clubs of Culture, Recreation and Sports

-Conquests of the Revolution Association

-Teachers Union of the Center Region