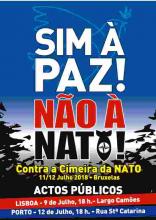 Once again this year Portuguese organizations have gathered to denounce NATO warmongering goals and its summit to be held in Brussels.

The organizations have been promoting initiatives throughout the country, with the distribution of documents and the campaign will culminate in several street actions, in the following days - from July 7 to 12-, namely in the cities of Lisbon, Porto, Coimbra, Faro and Évora.

See bellow the text cosigned by the Portuguese organizations that is the basis for the campaign.

For peace and disarmament!

No to the NATO summit – no to militarism and war!

On July 11 and 12, a NATO-North Atlantic Treaty Organization - Summit will be held in Brussels with the aim of strengthening its fighting capacity.

With almost 70 years of existence, NATO is an instrument aimed at serving, notwithstanding internal quarrels, the political, economic and geostrategic interests of the United States and the great powers of the European Union (EU), which drives the arms race, promotes areas of tension and conflict, intensifies military interventionism, and carries out wars of aggression against States and peoples who defend their sovereignty and do not submit to their domination.

The evolution of the international situation shows that NATO is at the service of the ambition of world domination by the USA, representing the main and most serious threat to peace in the world. Under the most different pretexts, NATO launched wars of aggression, such as those against Yugoslavia, Afghanistan or Libya, with their huge legacy of death, suffering and destruction. NATO collaborates with Israel's aggressive Zionist regime, being an accomplice of its brutal oppression on the Palestinian people.

NATO has decided to increase the military expenditures of its member countries, has created rapid intervention forces, has regularly carried out large-scale military exercises, moved military forces further to the East, installed the US anti-missile (THAAD) system in Europe - reinforcing the direct threat to countries it wants to subdue.

According to the Stockholm International Peace Research Institute (SIPRI), in 2016, military expenditures at the global level amounted to about 1 600 000 000 000 euros. The combined expenses of the United States, of the other NATO countries and of some of their allies (Saudi Arabia, Israel, South Korea, Colombia or Australia), a total of 34 countries, represent about two-thirds of the total of these expenditures. The remaining 159 countries of the world account for 1/3 of military spending.

NATO shares the doctrine of "preventive nuclear attack" by the United States, which has installed hundreds of nuclear warheads on military bases and naval fleets scattered all over the world, including in European countries.

The so-called military “Permanent Structured Cooperation” of the European Union is part of the process of militarization and reinforcement of the arms industry, in coordination and complementarity with NATO, deepening the EU as the European pillar of this political-military bloc. This guideline will be further strengthened if these various diversified plans go through, such as the creation of corridors of free movement for NATO armies in the EU, including, among others, the US armed forces.

Portugal should not contribute to NATO’s war machine. Portugal's commitment to the policy of militarization of international relations represents a subordination of its foreign policy and national defence to logics alien to the interests and aspirations of the Portuguese people and makes the country a strategic target.

Portugal must determine its foreign policy, its national defence and the role of the Portuguese armed forces in accordance with constitutional principles. The interests of Portugal and the Portuguese people are based on effective cooperation among sovereign and equal in rights States, favouring peace and social progress.

No more money for NATO and for war! Yes to social progress and Peace!

We must reject the arms race and increased military expenditures. Money should not be used to pay for interference, destabilization, wars of aggression against States and their peoples, but to solve and end unacceptable scourges like hunger, disease or poverty that affect millions of human beings,.

Portugal should use its resources to solve serious shortcomings and glaring problems, to improve public services in healthcare, education, for economic development, creation of jobs with rights, culture, public security and justice, to ensure a life of peace by refusing the increase in military expenditure within the scope of NATO of at least 2% of GDP.

The Portuguese people expressed, in important moments, their clear option for Peace and against Portugal's participation in NATO's military aggressions against other countries and peoples.

War is not inevitable! The forces of Peace, the workers, the men and the women, the youth, the people have a say! We believe that it is possible to build a fairer, more solidary world of progress, peace and cooperation, with respect for the independence and sovereignty of States and peoples.

The Signatory Organisations add their voice to the Peace movement in Europe, to the World Peace Council, to all those who denounce the aggressive nature of NATO and the warmongering objectives of its Summit, which will take place on July 11 and 12, 2018 in Brussels, and demand:

- End to NATO’ wars of aggression

- The dismantling of the US/NATO THAAD anti-missile system and the closure of military bases in foreign territory!

- Abolition of nuclear weapons and other weapons of mass destruction!

- End of the arms race and a widespread, simultaneous and controlled disarmament!

- Support to the displaced and refugees, victims of the wars that NATO promotes and supports!

- The signing and ratification by Portugal of the Treaty on the Prohibition of Nuclear Weapons!

- The compliance by the Portuguese authorities of the principles enshrined in the Constitution of the Portuguese Republic and in the Charter of the United Nations, of respect for sovereignty, independence, equality of rights and peaceful resolution of conflicts between States.

The Signatory Organisations (to date):