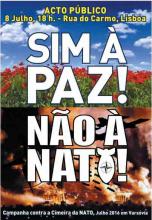 The Portuguese Council for Peace and Cooperation, together with other Portuguese organisations, involved in the “Yes to Peace! No to NATO!” campaign have published a newspaper that is being distributed throughout the country in several public initiative denouncing NATO and its Warsaw summit.

https://issuu.com/conselho_paz/docs/jornal_sim_a_paz_2016
See below the articles in English.

Yes to Peace! No to NATO!
- No to the warmongering aims of the Warsaw Summit

As in other European countries, organisations in Portugal from different fields of intervention have come together to challenge the warmongering aims of the summit that NATO will hold in the Polish capital, Warsaw, next July 8 and 9, and to express the demand for the dissolution of this political-military bloc, which has been the main threat to peace and security in Europe and worldwide. At a time when situations of tension and conflict mount and insecurity and international instability increase, the holding of this summit and its warmongering aims, at a time when NATO is increasingly approaching the borders of the Russian Federation and intervenes in the Mediterranean, is of the utmost seriousness.

These are not times of indifference, but of explanation and mobilisation: for peace; for the withdrawal of all NATO forces engaged in military aggressions; for the end of blackmail, destabilisation and wars of aggression against sovereign states; for support to refugees, victims of wars that NATO promotes and supports; for the closure of military bases in foreign territories and the dismantling of the US/NATO anti-missile system; for general disarmament and abolition of nuclear and mass destruction weapons; for the dissolution of NATO; and for the compliance by the Portuguese authorities of the principles enshrined in the Constitution of the Portuguese Republic and the United Nations Charter, respecting the sovereignty and equality of peoples and States.

In a recent interview to a Polish media, NATO’s Secretary General Jens Stoltenberg disclosed the warmongering aims of the Warsaw summit, directed against security and peace in Europe and the world. One of the main purposes is precisely the advance of the “front line” of NATO forces even closer to the Russian Federation, in particular with the deployment of military forces in various states of Eastern Europe. This measure will further increase military pressure on Russia, considered by NATO (together with China) as its "strategic adversary": in the last two decades, NATO has enlisted most of the countries that were part of the Warsaw Pact, and installed in many of them military bases and installations.

The July summit should also announce the recent creation of the “Rapid Intervention Force", made up of five thousand men able to intervene anywhere in the world within 48 hours; at least part of these forces would be installed in Eastern European countries. This summit comes just months after the holding of the biggest NATO military exercises in decades - in the south of Europe (involving Portugal) and to the East, in the Black Sea, the Baltic and Ukraine.

The support for non-member countries like Ukraine, Georgia and Moldova (all having borders with Russia) as well as for Tunisia, Iraq and Jordan are among the goals of the summit affirmed by the Secretary General.

Another of the summit's aims is the enlargement of NATO’s presence and action in the Middle East and North Africa, an increase in military spending by European member countries of the organisation of up to two percent of GDP and broadening of cooperation between NATO and the European Union - defined as its European pillar.
…............

NATO is an extension of US military power and acts according to its interests. Its foundation, in 1949 (four years after the end of World War II and six years before the creation of the Warsaw Pact), enabled the deployment of vast US military forces in Europe and the conditioning of Western European countries to US geo-strategic interests.

At the beginning of the last decade of the twentieth century, the charade about its proclaimed "defensive character" became even clearer: the disappearance of the Warsaw Pact was not followed by the dissolution of NATO, but rather by its reinforcement: it is now a superstructure of an openly offensive nature and on a planetary scale.

With the change of its strategic concept in 1999, and again in 2010, NATO claimed for itself the capacity to intervene militarily anywhere in the world under any pretext. The peoples of Yugoslavia, Afghanistan, Iraq and Libya and the millions of refugees, many of them Syrians who come to Europe, know quite well the meaning of its "war against terrorism" or "weapons of mass destruction ", “defence of human rights or of “democracy": millions of dead, wounded and orphans, gross violations of basic human rights, destruction of States and their infrastructure, including social infrastructure, looting of natural resources and control of markets.
…............
Tentacles of destruction

Founded in 1949 by 12 countries, the North Atlantic Treaty Organization/NATO currently has 28 members spread over North America and Europe (from the Atlantic coast to the gates of Asia, from the Mediterranean to the North Sea). Its tentacles extend, however, much further with “strategic partnerships” and bilateral agreements with several countries and state organisations in sensitive regions of the globe, such as the South Atlantic, Africa, Indian Ocean, Far East and South Pacific.

The opening of an Israeli mission at NATO and the partnership with Japan (which recently revoked the constitutional provision that prevented the country from participating in military actions outside its borders) are of particular significance and seriousness. The European Union assumes in the Lisbon Treaty its status as the "European pillar" of NATO.

The enlargement of NATO (whether what is already in effect or in preparation), combined with partnerships and agreements, the creation or reactivation of new commands and the complex network of military bases and facilities of its members around the world today puts this military bloc on the borders of what it calls its "strategic opponents," China and the Russian Federation, with huge risks to peace and security that this situation entails.
... ..................

In 2015, the world spent more than 1700 thousand million dollars in weapons and military equipment (Stockholm International Peace Research Institution –SIPRI - data). The US, with military spending in the order of 600 thousand million, remains by far the largest investor in war, assuming alone 36 percent of total world military expenditure. The three following countries - China, Saudi Arabia and Russia – together do not reach half the US amount.

All together, the 28 NATO countries make up nearly 50 percent of total military spending (i.e. as much as the remaining 165 United Nations member states), establishing themselves as the driving force of the current arms race. This "superiority" is even more striking if we add these costs to those of other NATO partners, like Saudi Arabia (5 percent of the total), Japan (2.4 percent), South Korea, Australia, the United Arab Emirates and Israel. One should also note the significant increase in military spending in many Eastern European countries, particularly in the three Baltic States, Poland, Romania and Slovakia.

What is spent on weapons and military equipment and what is spent in wars, could solve all food and health problems which now affect several million people around the world. Hence, the end of the arms race and a significant cut in military expenditure, freeing vast resources for infrastructure and social support, are political and ethical imperatives.

No to nuclear weapons: disarmament!

So far, only on two occasions nuclear weapons were used: on August 6 and 9, 1945, the US bombed with this type of bombs the Japanese cities of Hiroshima and Nagasaki, causing instant death to tens of thousands of people, slow death and many other serious disabilities and diseases, which still persist in many victims and their children and grandchildren.

The current nuclear arsenals, with an incomparably greater destructive capacity than the 1945 bombs, are a disturbing cause for concern to the world. The US and NATO, in their so-called strategies of “security”, accept resorting to nuclear weapons in a first strike, something no other country does. The abolition of nuclear and mass destruction weapons and general disarmament, simultaneous and controlled, are pressing needs of our time.

What is this so-called "Missile Defence Shield"?
It is a system that is being developed by the United States to detect and intercept any type of missile launched from anywhere in the world. This system includes a network of sensors, space satellites, land and sea radars, land and sea interceptor missiles and a communications, command and control network.

Where are its components located?
The elements of this system are operated by US military personnel from the Strategic Command, the Northern Command, the Pacific Command, the European Command (US) and the forces stationed in Japan. The US has missile "defence" programmes in a large number of countries, including the UK, Japan, Australia, Israel, Denmark, Germany, the Netherlands, the Czech Republic, Poland, Italy, Spain, Romania and many others. The US Missile Defence Agency actively participates in NATO operations.

Is it a defensive system, as alleged by the US?
Only in appearance. By being able to intercept any missile, the system ensures, in practice, a monopoly of this type of weaponry to the United States. Contrary to what is the case today, the US could launch an attack (including nuclear) against any country in the world, remaining safe from a possible response.

What consequences for peace could this system have?
The first consequence is, of course, the aforementioned de facto nuclear monopoly for one country alone, in this case the US, the only one to have used nuclear weapons and never expressed a commitment never to do it again in a first strike. This system will also, and inevitably, lead to an arms race by other countries to seek ways to circumvent or neutralise it. Its entry into full operation would mean a drastic imbalance of forces on a world scale.

In their actions for peace and dissolution of NATO, the Portuguese activists of the peace movement have a powerful ally, the Portuguese Constitution, which in Article 7 calls for the end of political-military blocs, disarmament and non-interference in the affairs of states. Here are the first three points of this article:

1. In its international relations Portugal is governed by the principles of national independence, respect for human rights, the rights of peoples, equality between states, the peaceful settlement of international conflicts, non-interference in the internal affairs of other states and cooperation with all other peoples with a view to the emancipation and progress of mankind.

2. Portugal advocates the abolition of imperialism, colonialism and any other forms of aggression, dominion and exploitation in the relations between peoples, as well as simultaneous and controlled general disarmament, the dissolution of the political-military blocs and the establishment of a collective security system, with a view to the creation of an international order that is capable of ensuring peace and justice in the relations between peoples.

3. Portugal recognises peoples’ rights to self-determination and independence and to development, as well as the right of insurrection against all forms of oppression.