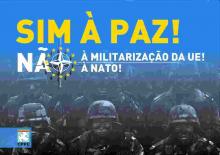 It is with great concern that the Portuguese Council for Peace and Cooperation faces the ongoing deepening of the militarization process of the European Union (EU). Militarism is, together with the curtailment of State sovereignty by supranational institutions dominated by the big powers and the promotion of neoliberal policies, who attack economic and social rights, one of the pillars of the EU — the creation of a future European army, despite the persisting contradictions, is an objective long pursued by the major European powers.

This process of militarization — although part of complex relation that permanently includes consultation and rivalry between the US and major European powers — has converged and been determined within the framework of NATO, with the EU as the European pillar of this political-military block.

The most recent step in the militarization of the EU was given last November 13th, with the signing by 23 member states with a joint notification about the Permanent Structured Cooperation (PESCO) in the military sphere — a element included in the Lisbon Treaty that foresees the possibility of a greater integration between EU member countries in this central area of state sovereignty.

The EU institutions assume PESCO as an «ambitious, binding and inclusive legal framework for investments in security and defence» and define as some of its objectives the common development of the «defence capability», the investment in «shared projects», the improvement of «operational readiness» and the increase in military budgets in each country at the service of this so-called cooperation.

Although Portugal is not among these 23 countries, the Government has demonstrated its intention to associate the Country in this process of militarist integration, which will begin next December 11th. Ireland, Malta, Denmark and the United Kingdom — country in the process of leaving the EU — have also not yet signed the declaration of intent.

The formalization of PESCO follows the creation, in June of this year, of the European Defence Fund, which aims to coordinate, complement and broaden investments in military research, in the development of prototypes and the acquisition of military equipment and technology. On top of the table are also proposals like the European Defence Industrial Development Program, with the aim of developing arms industry, and news steps towards ensuring the financing of the so-called EU battle-groups.

NATO’s reaction to the creation of PESCO, assumed on November 13th itself by its general secretary Jens Stoltenberg, clearly indicated the falsehood of the thesis that the militarization of the EU would serve as a counterpoint to the unipolar power of the US and its military instrument, NATO: « European defence which is good for Europe but also good for NATO. Stronger European defence has the potential to help us increase defence spending, provide new capabilities and also to improve burden-sharing within the Alliance. So this is a way to strengthen the European pillar within NATO.»

As CPPC has long denounced, and the Lisbon Treat itself states, the militarization of the EU is coordinated with NATO and in harmony with its objectives. Also among the statements of the 13th, the general secretary of NATO himself refers to «cooperation» and «complementary» between what it calls European Defence and NATO.

Recall that since its creation, in 1949, but with a greater expression since the turn of the century, NATO is an aggressive organization at the service of the foreign policy of the US and one of the greatest threats to peace in the world. NATO and its members — in particular the US and major EU powers —, among other examples, are responsible for wars of aggression against countries, such as Yugoslavia, Afghanistan, Iraq, and Libya, with a long list of death, suffering, destruction and millions of displaced and refugees; are the main promoters of increasing military expenditures worldwide (with its 28 members, all together, for half these expenses, that is, as much as more than 160 countries); are responsible for worsening the international tensions, by installing military forces and means in bases and fleets throughout the world, brandishing threats of aggression and promoting operations of destabilization, intervention, aggression, blockades and sanctions against sovereign states. The fact NATO admits, in its doctrine, the possibility of using a nuclear weapon in a first strike is particularly revealing of its warmongering nature.

Throughout the last decades, the EU has supported or been complicit with the military aggressions and operations of destabilization against the sovereignty and independence of different states conducted by NATO or its members.

The militarization of the EU, in cooperation with NATO, does not constitute a step towards the defence of peace. On the contrary, it represents more militarism, greater military spending, increased interventionism and threats of war.

The militarist option, including the increase in military spending, is accompanied by the promotion of an attack upon social rights by the EU.

The Portuguese Council for Peace and Cooperation rejects the militarization of the EU, in complement or not with NATO, and considers as urgent the demand to dissolve NATO and create a system of collective security that respects the principles enshrined in the United Nations Charter and pave the way to another world order of peace, disarmament, respect for sovereignty, progress and cooperation among peoples of the world.

The Portuguese Council for Peace and Cooperation reaffirms its commitment to the cause of peace, universal, simultaneous and controlled disarmament, the dissolution of political-military blocks, the peaceful solution of international conflicts, the non-interference in the internal affairs of States, the abolition of any form of aggression, oppression and dominion in international relations — important principles enshrined in the Constitution of the Portuguese Republic.

The Portuguese Council for Peace and Cooperation (CPPC) criticizes the Portuguese government for their decision to involve Portugal in the so-called Permanent Structured Cooperation (PESCO) on matters of «defence» and «security». As CPPC has long denounced, this greater integration in the military sphere and arms industry is part of the process of militarization of the European Union (EU) — conducted in coordination with NATO and its component — and has as announced aims: the increase of military spending in participating countries; the development and articulation of the arms industry; and the increase of its operational capability within the framework of an increase in EU military interventionism.

As the CPPC has highlighted, this decision constitutes «an additional step in the subordination and conditioning of the policy of national defence and the placement of Portuguese armed forces at the service of the interests, priorities and political options alien to the Country, calling into question the protection of national interests and the constitutional principles that should define our foreign and defence policy and role of the Portuguese armed forces».

However the Portuguese government and the EU tries to deny it, the project of a «European Army» — not without tensions, conflicts and divergences, namely with the US — has been, for a long time, an ambition of the major powers that lead the European Union.

At a time when the increased militarization of the EU is justified with the needs for defence and security of the European continent, the CPPC recalls the EU has supported or been complicit with the wars of aggression and operations of destabilization against the sovereignty and independence of different states, including in Europe, undertaken by NATO or its members in isolation.

The promotion of these wars of aggression — as in Libya and Syria —, major European powers have encouraged and armed terrorist groups who perpetrated heinous crimes and atrocities against populations. Terrorist groups that EU authorities say is responsible for terrorist acts in several European countries. As has been underscored, attempting to justify the need for EU militarization evoking terrorism and wars on the continent’s borders as a pretext is to name as causes what are consequences, seeking to use the tragedies resulting from the aggressive policy of NATO, the EU and their major powers as pretexts to take that same aggressive policy even further.

In addition, the EU has for a long time assumed itself as the European pillar of NATO, not only in practice but also in the words of the so-called Lisbon Treaty, where the EU militarization is referred as «compatible with the policy of security of common defence adopted» by NATO.

Portugal should not be associated with a policy of militarization of international relations, of strengthening of warmongering political-military blocks, of promoting interference, tension, conflict and war.

Reaffirming the rejection of the militarization of the EU, whether or not in complement with NATO, the CPPC underlines its demands, to which the present events add validity and prominence: the dissolution of NATO; the non-militarization of the European Union; the creation of a collective security system that respects the principles enshrined in the United Nations Charter — this is the safest path to defend peace and pave the way to a world order of social progress, sovereignty and cooperation among the peoples of the world.