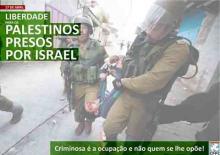 The Portuguese Council for Peace and Cooperation (CPPC), coherent with its stand and continuous action of solidarity with the cause of the Palestinian people, joins the International Day of Solidarity with the Palestinian Political Prisoners in Israeli Jails, marked for April 17.
On April 17, 1974, following the Israeli occupation of the territories of the West Bank, East Jerusalem and the Gaza Strip, 7 years before, and in the framework of an exchange of prisoners, led to the release of a Palestinian prisoner Mahmoud Hijazi. Since 1974, April 17 marks a worldwide day to recall and express solidarity with the Palestinians who remain in Israeli jails.
The CPPC, saluting the organisations that mark this date, denounces the detention of Palestinian political prisoners by Israel and the conditions to which they are subject – of denial of their most basic rights - which represent a clear and systematic violation by the State of Israel of the international standards and agreements it signed.
It should be noted that Israel systematically puts to trial children in military courts, condemning 13 year-old Palestinian children to prison terms which may last up to six months and those with 14 years to prison terms ranging from 10 to 20 years.
Signalling this day and reaffirming its solidarity with the cause of the Palestinian people against the occupation and repression, the CPPC denounces the unjust, inhumane and illegal situation imposed by Israel not only on Palestinian prisoners in Israeli jails, but also on the entire Palestinian people.
The CPPC calls all peace lovers to demand the release of Palestinian political prisoners in Israeli jails, an end to Israeli repression and occupation, and the implementation of the right of the Palestinian people to their independent, free and viable State, within the borders prior to1967 and with its capital in East Jerusalem.
The CPPC reaffirms the right of the Palestinian people to Peace, to Freedom, to a decent life and a sovereign and independent State.
Criminous is the occupation and not those who oppose it!
Palestine will prevail!

Portuguese Council for Peace and Cooperation's National Board