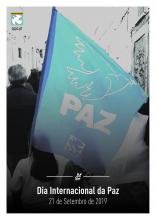 On 21 September, International Day of Peace, the Portuguese Council for Peace and Cooperation (CPPC) calls for commitment and mobilization in defense of the principles embodied in the United Nations Charter and the Constitution of the Portuguese Republic, such as sovereignty and the rights of peoples, the sovereign equality of states, the peaceful and negotiated settlement of international conflicts, the non-use of force or the threat of the use of force in international relations, the general simultaneous and controlled disarmament.

It is in the realization of these principles that it will be possible to safeguard peace and security in the world, today seriously threatened by the action of those who clearly violate the norms of peaceful coexistence between peoples and states, reached and established in international law after the end of World War II. It is up to the peoples of the world, through their mobilization, unity and organized action, to make governments implement and defend them.

The CPPC considers this relevant date as a time to further develop its action to clarify the grave threats to humanity and to mobilize for initiatives demanding, particularly with the Portuguese authorities, to take effective measures in the defense of sovereignty and peace, consistent with the spirit and letter of the Constitution of the Portuguese Republic:

the non-participation of Portuguese forces in aggression operations against other peoples;

the defense in international organizations in which the Portuguese state participates in the right of peoples to sovereignly decide their path, rejecting aggression, threats, blackmail and economic and financial blockades;

the signing and ratification by Portugal of the Nuclear Weapons Ban Treaty, which aims to eliminate this weapon of widespread destruction;

Portugal's non-participation in the strengthening and expansion of NATO and the defense of its dissolution;

Portugal's non-involvement in the process of militarization of the European Union and the defense of its reversal.

For the CPPC, these are some of the measures that Portugal could and should implement and that would contribute greatly to the furtherance of the unwinding of international relations, the building of mutual trust, the safeguarding of peace and security, the relationship of friendship and cooperation between peoples.

More important measures, as the United States and its allies drive a drastic increase in military spending, launch a dangerous new arms race, spread military bases and facilities around the world, destabilize and militarily and economically assault various sovereign states, point out the China and Russia as their strategic adversaries - aiming to secure control of geo-strategic resources, markets and regions and to impose their economic, technological, military, informational and ideological supremacy and thus their world hegemony.

The CPPC calls on all peace-lovers to mobilize and participate in the various initiatives that will be held today and on the day to defend peace, cooperation and social progress, sovereignty and the rights of peoples.

For Peace we are not all!