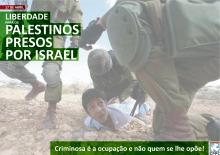 The Portuguese Council for Peace and Cooperation (CPPC) marked April 17th, International Day of Solidarity with Palestinian Prisoners in Israeli Jails, with the release of the statement bellow. In this occasion CPPC reiterates, once again, its solidarity towards the Palestinian people and its just cause, and salutes the sister organization Palestinian Committee for Peace and Solidarity.

(the image reads: "Freedom for the Palestinian Imprisoned by Israel / Criminal is occupation and not those who oppose it!)

On Palestinian Prisoner Day, marked today, the Portuguese Council for Peace and Cooperation (CPPC) reiterates its firm solidarity with the Palestinian people and, in particular, the seven thousand Palestinian political prisoners incarcerated in Israeli prisons, in what is one of the most brutal expressions of the illegal Israeli occupation of Palestine.

Since the beginning of the occupation, about 950 thousand Palestinian political prisoners have passed through Israeli prisons. There is practically no family who has not had at least one of its members imprisoned.

The illegality of these imprisonments, derived foremost from the illegality of the occupation itself, is flagrant, as in most part of them there is no presentation of evidence nor right to defence; many of these men, women and children are imprisoned without charges. Among the various Palestinian political prisoners, there are political leaders, deputies in the Palestinian Legislative Council, workers, writers, researchers, journalists, students and artists.

This Day of the Palestinian Prisoner was marked by the beginning of a hunger strike by more than two thousand prisoners, who answered the appeal by Marwan Barghouti, in prison for several years.

CPPC demands the release of the Palestinian political prisoners, which together with the respect for the right of return for refugees, constitute two of the conditions of the just and legitimate demand for the creation of a State of Palestine, in the borders prior to June 4th 1967, with capital in East Jerusalem.