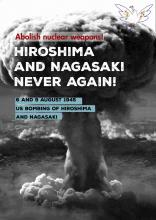 August 6 and 9, 1945 are dates that the peace lovers from around the world signal, to keep alive the memory of this heinous crime that was the launching by the USA of the atomic bombs on the Japanese cities of Hiroshima and Nagasaki and draw from this tragedy, which caused thousands of deaths and suffering that continues to this day, the need to continue and strengthen the struggle against militarism and war and for peace and disarmament, including nuclear disarmament.

Abolishing nuclear weapons is more urgent than ever, if we wish to avoid a new human catastrophe like the one experimented by the Japanese people, 73 years ago, or even one of bigger proportions.

The global stockpile of nuclear warheads is over 13,000 – 1,800 of them are on high-alert – and new developments in nuclear weapons technology and delivery mechanisms are driving proliferation.

Today, with the existing weapons, a new war of large proportions would mean Humanity’s destruction as we know it.

We recall the Stockholm Appeal, a major historical initiative of the World Peace Council, signed by hundreds of millions of people concerned and rejecting the use and the existence of the nuclear weapons.

The Treaty on the Prohibition of Nuclear Weapons, adopted July 7, 2017, is a milestone leading towards their total elimination, a long cherished aspiration of the Hibakushas and the peoples of the world.

All states should sign the treaty on the prohibition of nuclear weapons without delay.
Nuclear weapon States and their allies did not sign the treaty. In view of the seriousness and the threat by the USA to maintain, in its military doctrine, the right to the first use of nuclear weapons even against non-nuclear states and “agents,” and given the situations of armed conflicts generated by the USA and other Western imperialist powers, from within the framework of NATO and the EU, the survival of the whole humanity is being increasingly threatened.

The peoples of the world have to further develop public opinion that would exert pressure into abandoning the policy of “nuclear deterrence” and promote universal, simultaneous and controlled nuclear disarmament.

The survival of humanity depends on a world free from all nuclear weapons. We call for:

• An end to imperialist wars of aggression against the peoples and the respect of sovereignty and territorial integrity of all states;
• Respect for the principles of the UN Charter and the Final Act of the Helsinki Conference by all states, an end to the threat and use of force in international relations, and a universal pledge to a peaceful resolution of international conflicts;
• Commitment by all states to full prohibition of nuclear testing and development of nuclear weapons, including a ban on the militarization of space;
• An end to threats of use of nuclear weapons by all nuclear states;
• A universal commitment to ban all nuclear and other weapons of mass destruction;
• The signature and ratification of the Treaty on the Prohibition of Nuclear Weapons by all states;
• Adoption of necessary measures to ensure world peace, security, demilitarization of international relations and global and controlled disarmament.