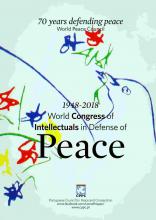 Exactly 70 years ago, between August 25 and 28 1948, the Polish city of Wroclaw hosted the World Congress of Intellectuals in Defence of Peace, an important expression of the world movement that, two years later, would join around the World Peace Council.

Three years after World war II and the victory over Nazi-fascism in 1945, this congress assembled hundreds of delegates from 45 countries, which included some outstanding intellectuals and artists, like Pablo Picasso, Eugénie Cotton, Irène Curie, Paul Éluard, Jorge Amado, Henri Wallon, Anna Seghers, Aime Cesaire, Andersen Nexø and György Lukács, among others. The largest delegations came from Poland itself, as well as from the United States, the United Kingdom, France, Italy, and the Soviet Union.

In the adopted Manifesto, the fundamental aim of the Congress was clear:

"We raise our voice in favour of peace, the free cultural development of peoples, their national independence and close cooperation." In a time already marked by new threats to a hard won peace - when the US and its allies were already carrying out what came to be known as the Cold War and, after Hiroshima and Nagasaki, brandished the atomic threat to the world - it was time to act with boldness and determination: the Congress urged intellectuals to "organise national congresses of men of culture in defence of peace in all countries; create national committees for peace in all countries; strengthen international links among intellectuals of all countries to serve peace".

The Wroclaw Congress also called for the holding, in a short time, of a world congress of peace advocates, that did take place in April 1949 - a few weeks after the formal constitution of NATO - in the First World Congress of Partisans for Peace more than 2,000 delegates from 72 countries participates, it was held simultaneously in Paris and Prague due to the refusal of the French authorities to allow the entry of delegates from some countries of Eastern Europe and Asia.

Differently from to what happened in August 1948, in the World Congress of Partisans for Peace not only artists and intellectuals, but also workers, students, farmers, religious people, elected officials, cabinet members, participated answering to the Call sent out on February 1949 “to all democratic organizations that have as a main interest the defence of peace and are dedicated to progress – trade unions, women and youth movements, peasant organizations, coops and religious groups, organizations of scientists, writers, journalists, artists and democratic politicians” to demonstrate in favour of peace.

The Manifesto of this congress, read in Paris by the French poet Louis Aragon, proclaimed the fundamental objectives and principles of the movement that then was then being born:

"We stand for the U. N. Charter, against all military alliances that nullify the Charter and lead to war.

We are against the crushing burden of military expenditure which is responsible for the poverty of the people.

We stand for the banning of atomic weapons and other methods of mass extermination of human beings; we demand the limitation of the armed forces of the Great Powers and the

establishment of effective international control over the use of atomic energy for exclusively peaceful ends and for the good of humanity.

We strive for the national independence and peaceful cooperation of all peoples, for the right of peoples to determine their own future — essential conditions for freedom and Peace.

We oppose all attempts to restrict and then to destroy democratic liberties in order to prepare the way for war. We are the world-wide bulwark of truth and reason; we aim at neutralising the propaganda which prepares public opinion for war.

We condemn war hysteria, the preaching of race hatred and hostility between peoples. We urge the denunciation and boycott of newspapers, literary productions and films,individuals and organisations which make propaganda for a new war. "

Pablo Picasso created the poster of the Congress, which elected the Standing Committee of Peace Partisans, based in Paris and coordinated by the French physicist Frédéric Joliot-Curie. It was this Committee that in March 1950 launched the Stockholm Appeal, for a atomic weapon ban, which collected hundreds of millions of signatures worldwide and made a decisive contribution to the affirmation and expansion of the world peace movement.

The Second World Peace Congress, held in November 1950 in Warsaw - was set for Sheffield, but the British authorities stepped back in their decision to authorize it - was a decisive step in the process of strengthening, coordinating and combining efforts of the world Peace movement. The two thousand people who participated in it, from 80 countries, decided on the constitution of the first World Peace Council chaired by Frédéric Joliot-Curie.

The statutes adopted there established the unitary, democratic, anti-fascist and anti-imperialist character of the World Peace Council, confirmed by it composition: among its 221 members were personalities from different nationalities, social origins, political ideologies and religious confessions. The defence of peace and disarmament, the peaceful resolution of international conflicts and national sovereignty, and solidarity with peoples who were victims of war, occupation, blackmail and blockade were from the outset its main causes.

Amongst other important aspects, the Manifesto to the Peoples of the World, issued by the Second World Peace Congress, underlined the necessity and the possibility of preventing a new war, of which there were already threats. “Every thinking person knows that he who dares to say “War is inevitable” slanders mankind. You who read this message, proclaimed in the name of the peoples of 80 nations represented at the Second World Peace Congress in Warsaw, must never forget that the fight for Peace is your own fight. You should know that hundreds of millions of defenders of Peace, united as one man, reach out their hand to you. They invite you to take part in the noblest struggle ever waged by mankind with confidence in the future. We cannot wait for Peace. We must win it.”, stated the Manifesto. The Congress it self was the expression that «men and women gathered from the five continents of the world can agree, despite great differences of opinion, in order to dispel the scourge of war and to maintain Peace», as also stated in the Manifesto.

In a time like the one we are living in, marked by mounting tensions and the militarization of international relations; by increasing interference, destabilization and wars of aggression; by the disrespect for the independence of States and the sovereignty and the rights of peoples; marked by the increase in military expenditure and arms race – as a result of a war mongering policy promoted by the USA, EU, NATO and their allies –, we must keep in mind the example of the defenders of Peace that, in equally harsh times, knew, despite differences, how to determine the main threat and danger, uniting forces against a new war and in the defence of Peace and the survival of humankind. Let us raise high and pursue today and in the future their legacy and their struggle.

August 28 of 2018
Portuguese Council for Peace and Cooperation