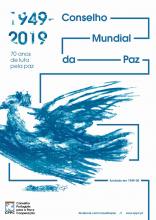 On March 16 the Portuguese Council for Peace and Cooperation held, in Lisbon, the initiative "70 years of struggle for Peace" in commemoration of the 70th Anniversary of the World Peace Council, read the text divulged in the initiative.

70 years ago, the First
World Congress of Peace Partisans

The world peace movement born of the victory over Nazi-fascism in World War II had in the First World Congress of Peace Partisans, that took place from April 20 to 26, 1949, and was attended by more than 2,000 delegates from 72 countries, one of its most important initiatives. Its simultaneous holding in Paris and Prague was due to the French authorities' refusal to allow delegates from certain countries of Eastern Europe and Asia to enter the France.

Among the participants were workers, intellectuals, artists, students, peasants, religious people, elected officials, rulers, political and trade union leaders and activists. Pablo Picasso prepared the poster of the Congress, as he would do for so many other achievements of the world peace movement.

The First World Congress of Peace Partisans resulted from the Appeal launched on February 25, 1949, by the International Coordinating Secretariat for Intellectuals for Peace (established in 1948 at the International Congress of Intellectuals for Peace held in Poland) and by the International Women's Federation. It was addressed to “to all democratic organizations that have as a main interest the defence of peace and are dedicated to progress – trade unions, women and youth movements, peasant organizations, coops and religious groups, organizations of scientists, writers, journalists, artists and democratic politicians”, urging them to demonstrate for peace and unite around the convening of Congress. The Appeal ended with the conviction that "we will see peace advocates rise up all over the world."

The Manifesto of the Congress proclaimed its fundamental objectives and principles, defining the nature of the world peace movement that was generated there:

"We stand for the U. N. Charter, against all military alliances that nullify the Charter and lead to war.
We are against the crushing burden of military expenditure which is responsible for the poverty of the people.
We stand for the banning of atomic weapons and other methods of mass extermination of human beings; we demand the limitation of the armed forces of the Great Powers and the
establishment of effective international control over the use of atomic energy for exclusively peaceful ends and for the good of humanity.
We strive for the national independence and peaceful cooperation of all peoples, for the right of peoples to determine their own future — essential conditions for freedom and Peace.
We oppose all attempts to restrict and then to destroy democratic liberties in order to prepare the way for war. We are the world-wide bulwark of truth and reason; we aim at neutralising the propaganda which prepares public opinion for war.
We condemn war hysteria, the preaching of race hatred and hostility between peoples. We urge the denunciation and boycott of newspapers, literary productions and films,individuals and organisations which make propaganda for a new war. "

We who have sealed the unity of the peoples of the world will exert our united strength on the side of Peace. In our determination to be vigilant, let us set up an International Committee for the Defence of Peace, composed of men of culture and representatives of democratic organisations. It will focus on those who want war, at every stage of their plot, the ever-present threat of the power of the people which is strong enough to impose Peace.

This congress had a planetary impact and constituted an important and positive contribution in the evolution of the international situation of that time, where the threats of war re-emerged. The creation of NATO, which took place on April 4, 1949, in Washington, that is, weeks before the congress, was a particularly serious and dangerous step in the US strategy of trying, at all costs, to impose its planetary dominion , including through the use of nuclear blackmail and of a new war. It was at this sensitive moment that the peoples of the world erected a powerful barrier to these pretensions, creating a setback.

The First World Congress of Peace Partisans appointed the Standing Committee of Partisans of Peace, which would be based in Paris under the coordination of the French physicist Frédéric Joliot-Curie, Nobel Prize winner and renowned anti-fascist. This Committee launched in March 1950 the Stockholm Appeal, a worldwide petition for a ban on nuclear weapons, which collected hundreds of millions of signatures worldwide and was instrumental in preventing such weapons from being used again after the nuclear horror on Hiroshima and Nagasaki on August 6 and 9, 1945. In Portugal, many thousands of signatures were collected for the Stockholm Appeal, despite the ferocious fascist persecution against those collecting them.

From the Congress of April 1949 there was a strong appeal for the constitution of national peace committees in all countries of the world. In Portugal, then under to a fascist dictatorship led by Salazar and patronized by NATO - dictatorship that was part of NATO’s founding nucleus - the peace partisans spread the Manifesto of the Congress and committed themselves to carry out actions and campaigns for the peace.

In August of 1950, the National Commission for the Defence of the Peace was constituted, of which distinguished personalities of the world of the culture and of the arts and recognized democrats, like Egas Moniz, Ruy Luís Gomes, Ferreira de Castro, Virgínia de Moura, Fernando Lopes-Graça, Maria Lamas, among many others. The Portuguese peace movement, facing all the obstacles posed by the fascist repression, developed its intervention regularly until the 25 of April of 1974.

The idea of holding a world congress of peace advocates came in August 1948 at the World Congress of Intellectuals for Peace, which met in the Polish city of Wroclaw. The process of forming the world peace movement was completed in late 1950, when the Second World Peace Congress in Warsaw established the World Peace Council, which included Manuel Valadares, a prestigious Portuguese scientist. In later congresses other Portuguese activists were present, like professor Rui Luís Gomes and the writer Maria Lamas.

70 years later - The fight for Peace is more pressing than ever!

The situation today is very different from the situation in 1949, but the dangers to international peace and security are immense, particularly those that stem from the warlike action of the United States, NATO and their allies: aggravation of tension and militaristic rhetoric; the brutal increase in military spending and the arms race, including nuclear weapons; the proliferation of military bases and facilities and naval fleets, particularly along the borders of Russia and China; the increasing interference and aggression against sovereign countries and peoples.

After 70 years, the World Congress of Peace Partisans of April 1949 remains an important source of lessons for all those fighting for peace, demonstrating the possibility of building the widest unity among sectors, movements and diverse social organizations in defence of peace, disarmament, for the respect of the principles of the Charter of the United Nations and international law, for anti-imperialist solidarity.

Seven decades on the process leading to its creation, the World Peace Council (WPC) remains committed to continuing the principles and objectives that were its origin and which presided over the First World Congress of Partisans of Peace.

The WPC remains committed to revitalizing a world-wide mass movement that advocates peace, disarmament and global security; for national independence, economic and social justice and development, for protection of the environment, human rights and cultural heritage; solidarity with and support of those peoples and liberation movements fighting for the independence, sovereignty and integrity of their countries, and against imperialism.

The WPC is an open and democratic forum for dialogue, cooperation, interaction and mutual assistance among sovereign and independent peace, disarmament, solidarity, humanitarian, ecological, scientific, cultural, religious, labour and other movements and organization, as well as individuals, without any discrimination on ideological, political or other grounds.

Thus the WPC is a broad coalition of movements and organizations which, on the international level, choose to combine their diverse activities for the achievement of a common goal: the creation and strengthening of a secure and just peace for all the peoples of the world.

The Portuguese Council for Peace and Cooperation (CPPC) assumes the legacy of the world peace movement and carries in its daily action its objectives and principles. Member of the Secretariat and Executive Committee of the World Peace Council, the CPPC reaffirms in everyday life the one that has always been its commitment: to act side by side with all those who, in Portugal and in the world, intervene with the aspiration and conviction that a world of justice, democraticy, solidarity and Peace is possible.

Today, as 70 years ago, the words of Frédéric Joliot-Curie guard a flagrant topicality: "Peace is everyone's business!"