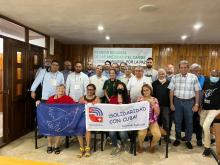 On 6th May 2022 the Regional Continental meeting of the Americas was held in the Cuban province of Guantanamo, hosted by the Cuban Institute for the Friendship of the Peoples (ICAP).

Besides the Cuban ICAP, delegates from the following countries and respective anti-imperialist peace movements took part in the meeting: Argentina, Brazil, Colombia, Venezuela, Barbados, Guyana, USA, Canada, Mexico and Puerto Rico along with guest organizations from Switzerland, Britain and Syria.

The Meeting which took place in the framework of the preparations of the XXII Assembly of the WPC to be held beginning of September in Hanoi/Vietnam, issued a Communique.

1. Strengthen the Unity of the global Campaign against Foreign Military Bases of the United States and NATO. Carry out massive national and coordinated actions with other peace-loving, anti-war, environmental organizations that fight for peace internationally, and denounce the possession and increase of military bases in our region and in the world.

2. Continue denouncing the arms race and the increase in the production of state-of-the-art nuclear weapons of mass destruction.

3. Insist on alerting and preventing the world from the danger that the occurrence of a Third World War entails for humanity.

4. Persist in the dissemination of the postulates of the Proclamation of Latin America and the Caribbean as a Zone of Peace, as a fully valid instrument that contributes to curbing and reversing the current conservative neoliberal offensive in the Region.

5. Revitalize the importance of the Treaty of Tlatelolco that outlaws the possession of nuclear weapons in Latin America and the Caribbean. Make an effort for the adoptionof the United Nations Treaty on Prohibition of Nuclear Weapons throughout the hemisphere.

6. Increase the expressions and actions of solidarity of the World Peace Council in support of the peoples and labor leaders and social movements threatened by the imperialist counter-offensive, relentlessly denouncing the campaigns of political, economic and media aggression.

7.Demand the lifting of the economic, commercial, and financial blockade imposed for more than 60 years by the United States government against the people of Cuba, intensified by the 243 measures applied by President Donald Trump, which the current administration maintains intact.

8.Continue demanding the return of the territory illegally occupied by the United States Naval Base in Guantanamo against the will of the Cuban people and the revolutionary government.

9. Support Venezuela, Nicaragua, and Bolivia against the attacks of US imperialism and its allies.

10. Denounce the colonial situation in the region, especially in the Malvinas Islands, South Sandwich and South Georgia, Puerto Rico, Curaçao, Haiti, and other territories of the Caribbean and South America.We accompany them in their request for Reparation of the African Peoples.

11. Carry out actions of solidarity with the Palestinian, Saharawi, Syrian people, and others who, in defense of their sovereignty, suffer the threats and aggressiveness of imperialism.

12. Continue expressing our solidarity with the Colombian people, and call for the implementation of the Peace Agreements, and respect for life and human rights.

13.Condemn predatory actions against the environment and natural resources, which are also a serious threat to peace, especially in the Caribbean region where the risk of natural disasters increases.

14.Improve the communication mechanisms between the member organizations of the region to achieve greater articulation of the actions undertaken in defense of peace.

15. Highlight the dates of significance for peace activists such as the anniversary of the dropping of atomic bombs on the Japanese cities of Hiroshima and Nagasaki; the International Day of Peace; and the “International Day for the Total Elimination of Nuclear Weapons.”

16. Advocate for a diplomatic solution to conflicts through constructive and respectful dialogue, as established by the Charter of the United Nations and international laws.

17.Promote the participation of the representatives of the organizations associated with the World Peace Council in the XXII World Assembly of the WPC, scheduled to be held at the end of August in Hanoi, Viet Nam.

18. Join efforts to strengthen and develop peace organizations and their membership in the five continents, especially in our Region.

19.Support the Peace Summit as a response to the NATO Summit to be held in Madrid, Spain, at the end of June 2022.

20.Reject any attempt to use the OAS, the inter-American system, and any space for regional convergence to exclude, pressure, and threaten the sovereignty of our countries. For this reason, the Peoples’ Summit initiative is proposed to be held in the city of Los Angeles, in the United States, in response to the American Summit convened by the US government.

21. Carry out actions to denounce the policy of unilateral sanctions, applied by the government of the United States and the European Union to the detriment of the economy and the lives of citizens in the sanctioned countries.

22.Reiterate the position of rejecting the immoral and unpayable foreigndebt.

23. Disseminate the final declaration of the VII International Seminar for Peace and the Abolition of Foreign Military Bases.

ACTIONS TO INCREASE THE ACTIVISM OF
PEACE ORGANIZATIONS IN THE REGION

2. Reminders aboutthe day of invasion of Puerto Rico by North American imperialism on July 25. Theme: Defense of Sovereignty and Independence.

3. Carry out from August 6 to 9, actions and initiatives for the anniversary of the dropping of atomic bombs on the Japanese cities of Hiroshima and Nagasaki, and for the elimination of nuclear weapons.