On Saturday 11 June 2016 the peace assembly against NATO took place at the Municipality Hall of Prague. Event was organised under slogan of the World Peace Council´s campaign „YES TO PEACE! NO TO NATO!“ and was organised by the Czech Peace Movement and the Association of Soldiers against War and was supported by several peace organizations and initiatives.

Chairman of the Association of Soldiers against War and Retired Colonel Jiri Bures in the beginning of the meeting stated importance of the struggle against NATO and its policy of imperialist wars and aggressions and appreciated the campaign of the World Peace Council organised among other in relation with the upcoming summit of NATO in Warsaw, Poland.

Chairman of the Czech Peace Movement Milan Krajca at the meeting underlined the danger of contemporary increase of NATO military presence in the Central and Eastern Europe demonstrated by several military exercises and other provocations. For instance on the day of the Prague peace meeting 4 military exercises of NATO took place only in the region of Poland and Baltic states with total participation of more than 50000 of NATO soldiers.

Vice-chairman of the Central Committe of the Communist Party of Bohemia and Moravia and veteran of the World Peace Council Josef Skala said that communists are ready to continue to build a broad peace and anti-war movement. Important goal of this movement should be the struggle against NATO and the Czech Republic´s membership in this aggresive military alliance.

Prague councilor Petr Simunek in his speech responded to right-wing councilors who tried to forbid the peace meeting at the Prague Municipality Hall and who called its participants „fifth column“ and „danger to security and defence of the Czech Republic,“ he stated it symbolise the importance of defending the right to debate on peace issues, foreign policy of the Czech Republic and of course the membership of the country in NATO.

In the debate also spoke number of representatives of different peace organizations among others several veterans of Czech and Czechoslovakian peace movement including those who participated in the proces of creation of the World Peace Council after the World War II.

At the end of the meeting a declaration was approved by it participants which e.g. notes: „NATO represents one of major security risks for the Czech Republic, which actively participates in its wars, aggressions and occupations held in contravention of the Charter of the United Nations and universally recognized norms of international law.“ 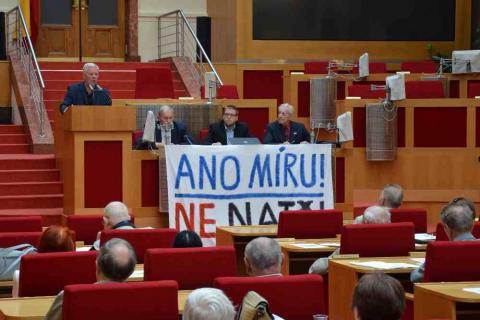 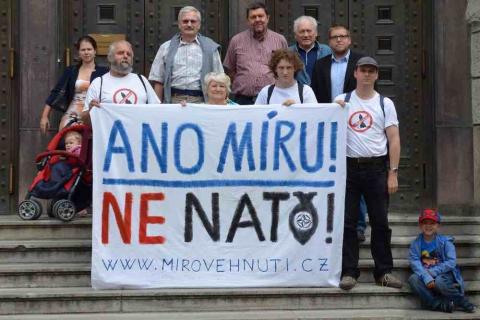