In the speeches by Gustavo Carneiro (CPPC), Libério Domingues
(CGTP-IN), Eduardo Fonseca (AAPC) and Simão Bento (from Associação
Projeto Ruído) valued the solidarity that Cuba provides to peoples all
over the world, namely, but not only, in terms of medical care, refuted
the lies conveyed by most media, which go as far as showing images of
other countries as if they were from Cuba or deliberately confusing mass
demonstrations in defence of the Revolution as if they were protests .

«Cuba Yes! Blockade No” and “Cuba Will Win” were some of the
slogans chanted.

Cuba is not alone! How could a people and a Revolution that gave and
gives so much to the peoples of the world? How could someone be alone
when, over the last six decades, it made solidarity, friendship and
cooperation the day-to-day of its foreign policy?

The peoples of Angola and South Africa, whose freedom and independence
were defended and achieved with the decisive help of Cuba say so; the
thousands of Venezuelans and Bolivians taught literacy by Cuban teachers
say so, the children of peasants and workers, so many grandchildren of
slaves, who on the socialist island became doctors, scientists,
engineers; the inhabitants of Sierra Leone, Liberia and Equatorial
Guinea say so, who during the serious epidemics of Ebola had Cuban
doctors at their side, and only they; or the Italians who, at the peak
of the COVID-19 epidemic, and in the face of the collapse of their
health system, counted on the quick, efficient and decisive intervention
of the Henry Reeve Cuban Medical Contingent. The revolutionaries all
over the world say so, persecuted in their countries and who have always
found there a solidary welcome and a place they could call home. And so
many other examples that we could give…

No, Cuba is not alone, it will never be alone!

Cuba will win! In fact, Cuba wins every day, since more than 60 years
ago it dared to take a sovereign, dignified and courageous path. Before
the January 1959 Revolution, Cuba was a huge brothel, a huge casino,
where American millionaires and mobsters amused themselves. Today, it is
a free country, with high levels of human development, making many
so-called developed countries blush in shame.

In Cuba, unlike most countries in Latin America and in the Caribbean, no
one sleeps on the streets, there are no children scavenging garbage to
survive, health care is for everyone, education is widespread, childhood
and old age are protected: life expectancy at birth is one of the
highest in the world, medicine is highly developed (despite the enormous
shortages caused by the blockade), university education rate is
impressive.

Obviously, nothing that has just been said hides the difficulties and
shortcomings caused by an economic, commercial and financial blockade
– illegal, immoral and criminal that has lasted for 60 years – added
to the effects of the pandemic. A blockade that intends to starve a
people as a form of collective punishment, as a political weapon. A
blockade that makes the procurement of aspirin, ventilators or surgical
masks a real epic; which significantly increases the cost of fuel
supply, which prevents Cuban children from having access to medication
or medical treatment. Yes, the blockade kills and criminals have a name:
US imperialism, successive administrations – including those of Trump
and Biden – and those who support it!

We have witnessed this picture before and we know its outcome. We are
well aware of the meaning of false humanitarian and liberating aid from
the United States of America. The peoples of Iraq and Libya know this
even better, States that had high levels of development and that after
this same so-called aid, this same liberation, are today faced with
poverty, misery, the absence of rights. The peoples of Brazil, Chile,
Argentina, Bolivia, Paraguay, Honduras, Nicaragua know it too well, who
do not forget the times of the sinister Operation Condor, the tortures,
the murders, the thousands who simply disappeared, but also the savage
neoliberalism that followed and the social devastation it caused. All
supported, prepared and organised by the United States of America.

Or, more recently, the coups in Paraguay, Bolivia, Brazil, Honduras, the
blockade against Venezuela, the destabilisation in Nicaragua. For US
imperialism, Latin America is its backyard, its property.

The script is always the same: the economic encirclement is tightened,
the difficulties caused by it are heightened, the information is
manipulated and the so-called solution is presented – coup,
humanitarian intervention, invasion. Always and always wrapped up in
beautiful words – democracy, freedom, human rights, precisely what the
brutality of interference and aggression disrespects and violates.

Cuba has resisted the US blockade for over 60 years, defeated mercenary
invasions, faced acts of terrorism, sabotage and a thousand and one
provocations, dismantled numerous attempts to assassinate its leaders,
in particular Comandante Fidel Castro. It will also resist this
offensive, orchestrated from abroad.

The Cuban people are a conscious, participating, revolutionary people.
They defend the Revolution, which is their own and which they build
every day. Once again, they will know how to rise to the challenges.
Always and increasingly with our solidarity – for the end of the
blockade, for the right to sovereignty, for cooperation between peoples,
which Cuba exercises every day.

Cuba will win and with it we will win!

CALL FOR PARTICIPATION IN THE ACTION OF SOLIDARITY WITH CUBA ON JULY 15
«NO TO THE US BLOCKADE! CUBA WILL WIN”

Cuba has resisted for more than 60 years the blockade imposed by the US,
the greatest economic and military power in the world.

Repeatedly condemned by the overwhelming majority of countries
represented in the United Nations General Assembly – as happened once
again last June – the economic, financial and commercial blockade
against Cuba seriously undermines the rights of the Cuban people and the
development of their country.

During the Trump Administration, even in the face of a serious global
pandemic, the US stepped up the criminal coercive measures against Cuba
– which the Biden Administration maintains – and increased the
destabilising actions directed against Cuba's sovereignty and the rights
of its people.

Cuba is an example of courage and dignity, sovereignty and popular
participation!

Cuba is an example of solidarity and international aid, particularly in
the health and education sector!

Despite the blockade, Cuba produced the first Latin American vaccines
against Covid-19!

It is necessary to denounce the hypocrisy of those who, like the US, are
trying to stifle Cuba's economy and impose difficulties on the Cuban
people!

No to the policy of interference, no to the US blockade against Cuba!

Cuba is not alone! 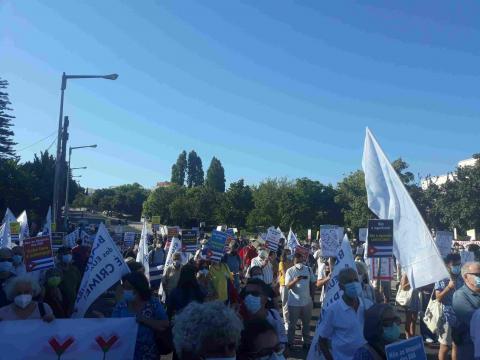 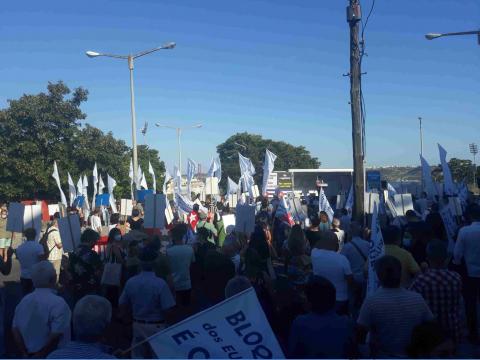 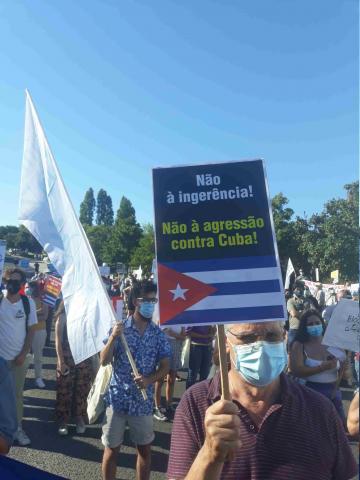 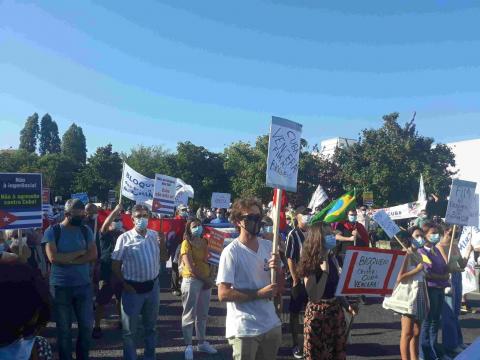 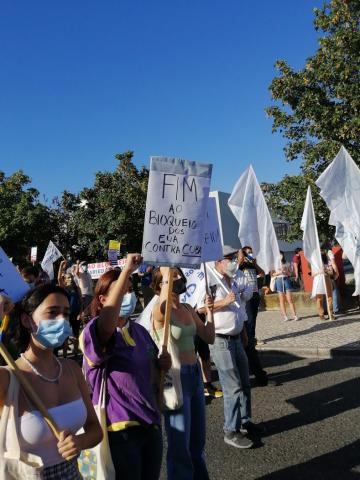 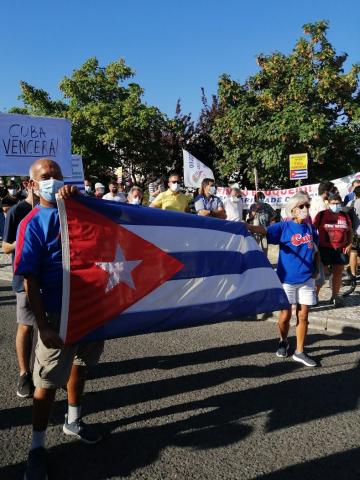 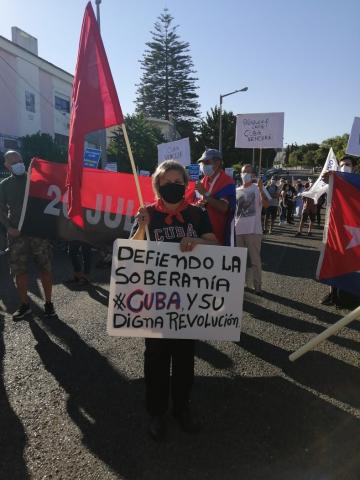 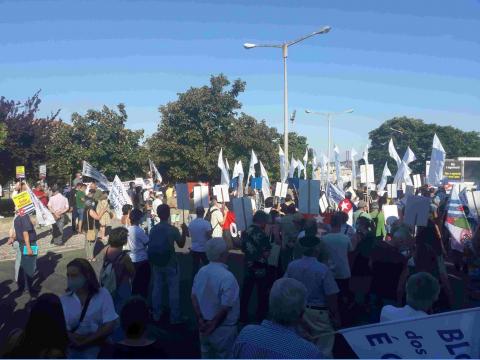 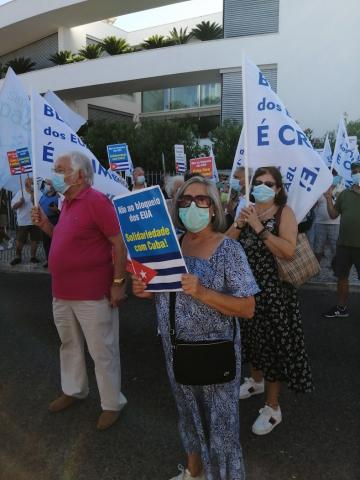 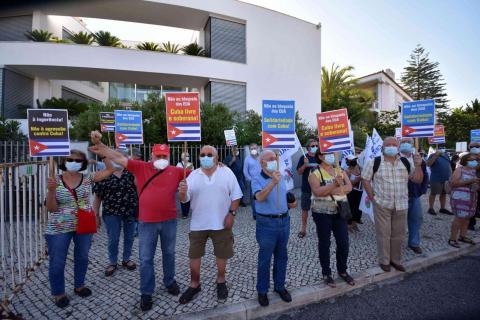