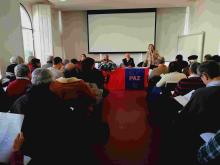 The Portuguese Council for Peace and Cooperation held, on December 16th, in Lisbon, its Peace Assembly, which determined the action priorities and the CPPC bodies for the next two years. Ilda Figueiredo was re-elected as president of the National Leadership.

The documents guiding CPPC activity, namely the Resolution, Action Plan for 2018-2019, and the Activity Program for this year, indicate the priorities: defence of peace and disarmament; demand the dissolution of NATO and the end to foreign military bases; solidarity with the peoples that fight for their right to sovereign development; struggle for a Portuguese foreign policy that is coherent with the spirit and letter of the Constitution of the Portuguese Republic.

In order to widen the action around these causes, CPPC proposes to «maintain and reinforce the work of the previous years, namely in education for peace; the development of a culture of peace; the involvement and cooperation with local government, associations and other entities; organizing diverse initiatives for the promotion of peace and solidarity».

The examples of the Peace Concerts and the campaign for the abolition of nuclear weapons were very valued. The assembly also approved organizing, this year, a meeting for peace that involves in its preparation and realization wide social sectors and organizations.

In another work front, inseparable from the former, is the reinforcement and growth of CPPC, fundamental action to sustain the planned increase in activity. Some of the essential issues the elected bodies with try to achieve are: obtain for members; create new working groups and reinforce the existing groups; multiply and diversity the initiatives and disseminate them throughout the national territory; and improve information.

The Peace Assembly Resolution outlines the panorama of the present foci of tension and war and, also, of resistance of peoples and peace movement worldwide. Although it recognises the balance is still tilting towards those who «invest in militarism and war, aggression and oppression», and recognises the advances achieved by the forces of peace, which demonstrate it is possible and necessary to «build a world of peace, sovereignty and cooperation».

CPPC values the victories of the liberation of the majority of the Syrian territory, by the patriotic forces of the country and their allies, from the Daesh or al-Qaeda terrorist groups; the efforts by the Palestinian resistance aimed towards rebuilding its unity, the affirnation of Palestinian people’s rights; the electoral successes of the Bolivarian forces in Venezuela, who aborted the plans of the oligarchy and US of overthrowing the legitimate government of the country through terrorist violence; the overwhelming votes in the General Assembly of the United Nations for ending the blockade on Cuba; the large popular demonstrations in Japan and South Korea against the militarization of their countries and the presence of the US, and in Europe against NATO; the adoption by a United Nations conference of the Treaty for the Prohibition of Nuclear Weapons.