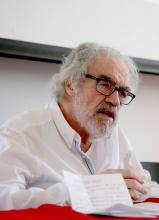 Silas Cerqueira is unquestionably one of the most prominent figures of the peace and solidarity movement in Portugal, to which he has been linked almost since its inception, at the turn of the forties and fifties of the 20th. century.

He studied Theology and Philosophy of Religions in Louisville and at Columbia University in New York, in the United States. Here he met and fought against racial discrimination and also the cruel reality of the Korean War, placing himself immediately on the side of the Korean people against US interference and aggression and for the independence and reunification of their country. While in the US he associated with several progressive personalities.

Deeply marked by this experience and committed in this fight, he joined the Portuguese peace movement on his return to Portugal in 1952 – those were the years of the Stockholm Appeal against nuclear weapons, of the Peace Pact among the five great powers, of the objection to the war in Korea and the presence of Portugal in NATO. In Portugal, those were the hard times of fascist repression which tried to silence by force the demand of the Portuguese people for peace, freedom and progress.

His involvement in the struggle for peace led him into prison at the end of 1952. His "crime"? Placing a wreath of flowers at the monument to the combatants of the Great War, a traditional initiative of the peace movement in those dark years of oppression. This arrest triggered a massive protest by the Baptist community and democratic sectors of Porto. In 1955 he was arrested in Porto with over a hundred other young people, 52 of whom would be tried in 1957, including Silas Cerqueira and his wife Antónia Lapa. Silas Cerqueira was again arrested several times, namely in 1953, 1954 and 1958.

Until the April Revolution, which began on April 25, 1974, both in Portugal and in France (where he went to live in exile), and where he was a researcher of political science at the Centre de Relations Internationales (CERI) of the Fondation Nationale de Sciences Politiques in Paris and at the University of Besançon and the Institut des Hautes Etudes d'Amérique Latine, Silas Cerqueira never ceased to fight actively and selflessly for the values of peace, disarmament, solidarity, friendship and cooperation among peoples and States, fighting the fascist regime that oppressed the Portuguese people and the peoples of the African colonies.

During this period, Silas Cerqueira represented several times the Portuguese peace movement in meetings, gatherings and congresses of the World Peace Council.

Following the April Revolution, Silas Cerqueira returned to Portugal where he continued and intensified his actions for peace, this time in freedom.

Among many and diverse initiatives in 1975, is the organisation of the international conference of solidarity between the Portuguese and Angolan peoples against imperialist interference, which brought to Portugal the then president of the World Peace Council, Romesh Chandra.

In April 1976, he actively participates in the formal constitution of the Portuguese Council for Peace and Cooperation, which gave legal expression to a firm and long existing, but severely repressed for years, reality in Portugal: a front of struggle in defence of peace that integrates people from various sectors of Portuguese society, with different political ideologies and religious beliefs.

In the Portuguese Council for Peace and Cooperation, Silas Cerqueira had a leading role in the broadening of the peace movement and in the active solidarity with peoples, who all over the world, resisted imperialism.

In November 1979, he takes part in the organisation of the "World Conference in Solidarity with the Arab People and their Central Cause – The Palestinian Issue”, held in Lisbon. The presence of Yasser Arafat in this important initiative was the first visit of the Palestinian leader to Western Europe, contributing decisively to break the isolation of the Palestinian cause in this region of the world.

The International Conference of Solidarity with the "Front Line States" (Zambia, Tanzania, Botswana, Mozambique, Angola, Zimbabwe, Lesotho, and representing the people of South Africa, the African National Congress/ANC), aimed at the national liberation of the colonised peoples and the end of apartheid, held in Lisbon, in March 1983, also had the outstanding participation of Silas Cerqueira, as well as other important initiatives including the Conference of Solidarity with the Sandinista Revolution in Nicaragua, in 1989.

The same happened with the creation of the Portuguese Movement against Apartheid, which, following the initiative of the CPPC, gathered various organisations and personalities. It was in the scope of this movement that Nelson Mandela participated in several actions of contact with the Portuguese people, who often expressed their solidarity with the struggle of the South African people.

Silas Cerqueira was, from the outset, actively solidary with the peoples of the former Portuguese colonies and their national liberation movements, in particular the Angolan people and the MPLA in its action for the consolidation of independence. He lectured as a visiting professor at the Agostinho Neto University of Economics in Luanda, from 1989 to 1991. After his return to Portugal, in 1991, he was a professor at the University of Minho until his retirement.

Another great initiative to which his name becomes linked is the creation of the movement "No to Nuclear Weapons", which gathered various organisations, trade unions, municipalities and personalities and promoted great united actions in Portugal.

Silas Cerqueira actively participated in the creation of the Movement for the Rights of the Palestinian People and for Peace in the Middle East (MPPM) in 2005, which gathers various Portuguese individualities.

Silas Cerqueira was present in a tribute to him organised by the Portuguese Council for Peace and Cooperation, on May 31, 2014.

Relentless fighter for the cause of peace, Silas Cerqueira was a member of CPPC leadership for decades, and was currently a member of its Presidency.

The best tribute that the CPPC and peace lovers can pay to Silas Cerqueira is to follow the example of this fighter for peace, continuing the struggle for the just cause to which he devoted all his life.

The CPPC informs that the wake of Silas Cerqueira will be held at the House of Peace, headquarters of the Portuguese Council for Peace and Cooperation, in Lisbon, at Rua Rodrigo da Fonseca, 56, 2, between 17.00 and 22.00, on Wednesday, August 24 and between 10.00 and 16.00 on Thursday, August 25, followed by his funeral at the Alto de São João cemetery at 17.00.