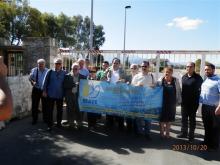 The fourth meeting of the anti-imperialist peace movements of Turkey, Cyprus and Greece took place in Chania on October 19th - 20th under the auspices of the World Peace Council. In a particularly friendly and constructive atmosphere, the delegations of the three countries agreed on the following joint communiqué:

The Greek Committee for International Détente and Peace, the Cyprus Council Peace, and the Peace Association of Turkey concluded their fourth meeting in Chania on October 19th - 20th, 2013, following the meetings in Mytilini (2010), Istanbul (2011) and Nicosia (2012).

We have noted with great satisfaction that the working people and the youth of the Chania area have given their full support to our initiatives. This is especially significant because of the location of the US – NATO Base of Souda in this area, a military base which supports imperialist wars and aggressions. The meeting expressed its thanks to the Peace Committee of Chania and the other organizations of the popular movement for hospitality and excellent organization of the meeting.

This year, the Base of Souda is completing its 60th year of service and support for the imperialist plans of the USA and NATO, with backing and cooperation from all the Greek governments. In addition, thousands of American soldiers and personnel at the Base are still in full readiness today for their present threats and future aggression on Syria and Iran. The air and sea Base of Souda is the “unsinkable aircraft” of the USA - NATO - EU for their fleets, nuclear submarines and weapons of mass destruction.

Our fourth meeting in succession has taken place in a period when our three peoples, and especially those of Greece and Cyprus, are plagued by the difficulties of the economic crisis and the various policies of their governments. Hand-in-hand with the EU and the IMF, these governments continue to impose new measures to intensify the exploitation and destitution of the peoples, while at the same time aiming to increase the profitability of capital and of the monopolies. Moreover, this meeting denounces all anti-popular economic and social measures of the Turkish government and its tight authoritarian behavior, which we witnessed against the large mass popular protests in June 2013.

The East Mediterranean area with its abundance in natural resources is at the crossroads of the rivalries among the powerful imperialist and other forces over controlling not only its resources, but also the routes for transporting them. USA’s and NATO’s “New Middle East” plan promotes and supports the establishment of friendly regimes with the aim of securing large profits for the multinational US and European based monopolies.

Within this framework, we strongly denounce the setting up of NATO’s Patriot missiles in Turkey, which will intensify and escalate the air raids of the Turkish and Israeli air forces on Syria. We also denounce the plans of the new government in Cyprus for accession of Cyprus to NATO’s “Partnership for Peace”. We condemn the joint military maneuvers of our countries with Israel, a terror-state which continues to occupy Palestinian and other Arab territories.

The provocation staged by the powerful imperialist states and the military groups of the “anti-regime fighters” in Syria in August and before that, regarding the use of chemical weapons, was aimed at repeating the already well-known scenarios which would have prepared the ground for an open intervention in Syria. The majority of our peoples have rejected this pretext, having in mind the rich experience from Yugoslavia, Afghanistan, Iraq and Libya, where similar false pretexts were used. Our movements condemn the dangerous role that our governments play in making military preparations providing military bases, airports and other facilities in our countries.

We also condemn the European Union for lifting the arms embargo for the opposition mercenaries and for fully supporting them as the “legitimate representatives” of the Syrian people.

Being aware of the fact that the international provocation against the people of Syria includes serious war crimes committed by imperialist powers and the reactionary regimes of the region, we support the initiative under preparation by the Peace Association of Turkey concerning the criminal responsibilities of the Turkish government.

A direct intervention to Syria seems to have been avoided or postponed as a result of the resistance of the Syrian people, the solidarity of the peace loving forces all over the world and the new equilibrium between imperialist states and other global and regional big powers. However it is our duty to warn peace forces that the risks still prevail. While defending on the one hand a Middle East completely free of any mass destruction weapons, we keep conscious that the international consensus on the abolition of the chemical weapons in Syria has opened the way to imperialists for intervening into the domestic affairs of Syria, leaving untouched other capitalist states in the region holding chemical, biological and nuclear weapons, and the imperialist military bases. At the same time, the intervention in Syria, which has caused 1,5 millions refugees towards Turkey and other neighbor countries, the war state has opened ways for more intense criminal actions of the reactionary Gulf monarchies and deployment of extremist religious groups in the region, As a result the region is much closer to conflicts than before.

We thoroughly declare our solidarity with the Syrian people in their effort to repel the planned imperialist intervention and in their just claims for changes in economic, social and political sphere. The Syrian people alone have the right to determine its own fate and its future.

We declare our unreserved solidarity with the people of Cyprus, the Greek-Cypriots, Turkish-Cypriots, Maronites, Latins and Armenians to end the occupation of 37% of their island.

Our trilateral meeting supports the solution of a bi-zonal, bi-communal federation with political equality as defined by the resolutions of the United Nations on the Cyprus Question, the high level agreements between the two communities of 1977 and 1979, and the principles of international law. We must strengthen our struggle for a solution that will lead to a unified country with a single international identity, a single sovereignty and citizenship, a country without foreign armies, bases and protectors, a country that will secure the rights and freedoms of all Cypriots, the right of the Cypriot people to choose its own road to development according to its own interests.

We salute the June mass popular protests and rallies of the people and the youth of Turkey that showed its resistance to the autocratic government, to its anti-popular policies and its efforts to introduce religious rules into social life, and also their struggle against the government of Erdogan and its war-mongering and pro-imperialist policies.

We express our outrage and condemnation to the actions of the criminal Nazi organization of killers “Golden Dawn”, in Greece, which serves the interests of the capital and is trying to mislead the workers, but also to intimidate them. This organization, which with racist hatred has murdered, beaten and tortured dozens of immigrants in our country, is the same organization that is trying to manipulate working people, to make them submissive, organs of the big contractors, the ship-owners, the exploiters of the workers’ toil, demonstrating once again that fascism is born from the womb of capitalism’s decay. We underline that the only effective struggle against and confrontation of this phenomenon can be achieved only by the organized massive struggle of the trade unions and the popular movement.

We, the anti-imperialist peace organization of Cyprus, Turkey and Greece, together with the World Peace Council, demand the abolition of all nuclear, chemical and biological weapons and all weapons of mass destruction, and first and foremost the destruction of all weapons of this type owned by the powerful imperialist countries. We oppose the installment of the so-called Antimissile Defence Shield in Europe, which is promoted by the USA. It is necessary to put an end to any possibility that the Aegean Sea could be used in support of this plan.

We oppose the participation of our countries in imperialist plans and actions against the people of our area. We demand the implementation of the International Convention on the Law of the Sea of 1982, and the definition of Exclusive Economic Zones. We fight for the immediate dismantling of and withdrawal from our countries of all US and NATO equipment and personnel, and for our withdrawal from NATO and other imperialist organizations. We demand the return to their homelands of all military and police forces stationed abroad. We uncover and stand up against state terrorism and repressive police mechanisms and laws against the peoples. We fight for true protection and support for all refugees and economic migrants. We are in solidarity with the peoples who rise up against imperialist wars, occupations and aggressions, and show their resistance to the aggressive measures of the bourgeoisie and its governments. Based on our principles, we support and demand recognition by the United Nations of an independent state of Palestine within the borders of June 4th, 1967, with East Jerusalem as its capital.

As anti-imperialist movements of Greece, Cyprus and Turkey, which meet under conditions when the imperialists are attempting to carry out extremely dangerous plans in our countries, in the Balkans, and especially in the Middle East, we are aware that our ongoing and close coordination is the best contribution in the anti-imperialist struggle of our peoples. We call on the working class and its allies in our countries for a joint struggle against the capitalist barbarism that causes crises and wars. In addition, we call on all the peoples of our area to be vigilant, because the imperialist war plans have not come to an end irrespective of their maneuvers and temporary compromises.

We particularly pay attention to the need to follow closely and prepare ourselves for the developments around the summits of the European Union in December 2013 and of NATO in April 2014 in the UK, where the imperialists will concretize their political and military plans against the peoples.

We commit ourselves to act with multifaceted initiatives in our countries as well as jointly,in order to strengthen of the Peace Movements and the coordination with the popular and worker’s movement.