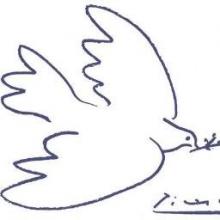 At the same time as the peoples throughout the world, and particularly in Europe, are demanding that they want Peace, in a climate of economic crisis and vicious austerity imposed by the governments of the European Union, thousands of children in the Middle East and Africa are dying in their attempts to reach a country that will offer them the bare minimum to survive and for a life with prospects, as well as many other children of their age. Imperialism’s machines are being reloaded to kill even more of these children. In this context. The criminal NATO, very well known to Cyprus too, is demanding from its members that they increase expenditure on their war machine.

The Pancyprian Peace Council (CPC), responding to the call of the World Peace Council for anti-imperialist actions by its member countries, and in view of the NATO Summit in Warsaw on 8-9th July, is organizing a mass event under the slogan "No to the wars that are butchering the peoples”.

The event will take place next Saturday 2nd July 2016 at 10 a.m. at the Castle Square in Larnaca. Over 100 children from Cyprus and abroad will take part. The children with all the fighters for peace present will form at some point during the event a human chain in front of the sea. In addition, they will send out in the Mediterranean waters hundreds of small red paper boats with anti-war messages, symbolizing the loss of countless refugees, daily victims of the ongoing imperialist wars and interventions.

At the same time as a human chain will be formed in Larnaca in front of the sea, the Pancyprian Peace Council is planning to organize similar human chains in other districts too.
At the event in Larnaca other actions will simultaneously be taking place, including an anti-war cultural program, while those who will take part will be given white T-shirts with slogans in favor of peace and against NATO and its wars.

The CPC invites the Cypriot people, a victim of NATO’s actions, to attend in mass numbers this very important interactive event next Saturday, 2nd July at 10 0’clock in the morning so that we join our voices with those of the peoples of the rest of Europe and the whole world for peace, against NATO and its wars. We demand the dismantling of its machine of war and destruction. We also demand that every Euro that is used today for NATO war industries be spent on education, health and the prosperity of the peoples.