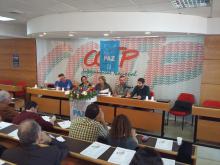 In the framework of activities against NATO leading up to NATO’s summit in Brussels the Portuguese Council for Peace and Cooperation held a public seminar under the banner “Yes to Peace! No to NATO!” on April 1st in Lisbon, when the 68 years of this political-military block were being marked.
The initiative, that denounced NATO’s nature and objectives and stressed the need for NATO’s dissolution, had the participation of several Portuguese and of the Forum against War from Italy and INTAL from Belgium, country where next NATO’s summit will take place.
Several initiatives against NATO were announced be it in Portugal be it in the other two countries with emphasis on Belgium where INTAL alongside other organizations from Belgium are already preparing initiatives for peace and against NATO and its summit.
The international guests presented the present political, social and economic situation of their countries and their governments commitment to NATO. Recalling as an example, the announcement by the Belgian government of its intention on buying new fighter jets with nuclear weapons carrying capability, and other military equipment in a clear militarist escalation, against the interests of the Belgian people and at the expense of social cut backs. Italian participants underlined the fact that Italy spends around 8 million Euro everyday with NATO, the need for Italy to withdraw from NATO and for the disbanding of this military block, and that NATO is a tool of USA imperialism.
Portuguese speakers addressed the political and economic situation of Portugal in the new political cadre that resulted from last parliamentary elections, NATO’s expansion, the arms race – namely USA’s nuclear revitalization program with the large dangers it ensues – the role of the European Union as NATO’s pillar in Europe, the historical background of the fight against NATO in Portugal since the its creation and even under the Portuguese dictatorship, the present day struggle for NATO’s dissolution, the role of the Portuguese government that in disrespect for the Portuguese Constitution and the peaceful will of the Portuguese people continues to embark in NATO’s policy of aggression and on the EU militarization.
With a lively debate the session closed with the commitment to continue the struggle for Peace and to promote and participate in the coming initiatives against NATO in each country and to converge in the initiatives being prepared by the Belgian peace movement and by the WPC in Brussels at the time of NATO’s summit in that city, namely the demonstration announced for the afternoon of May 24th in Brussels, amongst other activities.
All present were conclusive in the need for all peace loving forces to unite in the struggle against NATO, for peace and social progress.