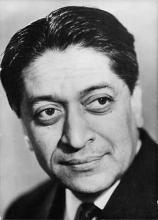 3rd January 2020 in Raipur/India
dedicated to the centenary of birth of ROMESH CHANDRA
Delivered by Iraklis Tsavdaridis, Executive Secretary WPC

Distinguished comrades and friends of AIPSO

The WPC family is fulfilling today together with AIPSO a special task by honoring the historical leader of the WPC and son of the Indian people late comrade Romesh Chandra who passed away on 4th July 2016 in the age of 97.
On behalf of the Secretariat of the WPC we are paying once more our tribute to the outstanding figure of the World Peace Movement in his centenary of birth. By remembering Romesh Chandra for his lifetime contribution to the WPC, we carry on his legacy and commitment for a world without imperialist wars and exploitation, for a world of peace and social justice where all the people of the planet will live in equality and as masters of their destiny.
Romesh Chandra was born on March 30th, 1919, in Lyallpur, India. He received degrees from a university in Lahore and from Cambridge University. From 1934 to 1941 he was chairman of the Students’ Union in Lahore. He became a member of the Communist Party of India (CPI) in 1939, of the Central Committee of the CPI in 1952, of the National Council of the CPI in 1958, and of the Central Executive Committee in 1958; from 1963 to 1967 he was a member of the Central Secretariat of the National Council of the CPI. From 1963 to 1966, Chandra was editor of the central organ of the CPI, New Age.
He served as General Secretary of the All-India Peace Council from 1952 to 1963. In 1953 he joined the World Peace Council, and in 1966 he became the WPC’s General Secretary and a member of its presidium while in 1977 he was elected President of the WPC. During the Assembly of WPC in Athens in 2000 Romesh Chandra contributed decisively to the preservation of the anti-imperialist character of the WPC and got elected President of Honour.
In more than the half time of the 70 years of history and struggle of the WPC our Romesh Chandra was present in the front line of this prestigious international organisation. Romesh Chandra experienced the times with the highest level of international recognition for the WPC, as well as the difficult times of the 1990s, where friends and enemies thought that there might not be any future for the WPC. His advice and opinion was decisive in “re-directing” in the year 2000 things towards the historical mission and role of the WPC. Romesh Chandra, along with other WPC leaders, was troubled with the stand of things in the WPC towards the NATO aggression against Yugoslavia in 1999. He could not accept and tolerate the ambiguous position which was actually justifying the crimes of the NATO imperialists.
Romesh Chandra was awarded the F. Joliot-Curie Gold Peace Medal in 1964. He received the International Lenin Prize for Strengthening Peace among Nations in 1968, and he was awarded the Order of Friendship of Peoples in 1975 by the USSR.
Romesh Chandra was a genuine son and figure of the Indian working-class movement and one of the leaders of the world peace movement. He was an example of an Internationalist who never compromised his revolutionary identity and values. He championed in the support of the liberation struggles of the peoples of Africa, Asia and Middle East, in the struggles against dictatorial regimes around the world.
Till today we meet people around the world who identify the WPC with its historical leader Romesh Chandra. For us who had personally the privilege to meet and work with Romesh Chandra it constitutes an important chapter of our struggle.
With the deepest understanding of the world culture and history, of the world peace movement, for the independence of the developing countries, Romesh Chandra's statements voiced fluently in English and French in the name of peace and the progressive people of the world on all people's international forums for peace, solidarity and friendship spread all over the world including at the United Nations Non-Governmental Organization Forum or in the Non Aligned Movement (NAM). His speeches attracted and encouraged people of all generations, to engage them in the peace, friendship and solidarity activities for a peaceful world of justice and social progress.
We are very proud that we took the initiative to visit Romesh Chandra at his place of origin in November 2014 in Mumbai, right after the Goa Executive Committee of the WPC with a ten member delegation. The visit took place one year after I had the pleasure to visit Romesh Chandra alone in September 2013, in order to prepare the collective visit for 2014. In our meeting with Romesh and his son Feroze and daughter in law Chandita, we felt that the WPC was really his second family.

Romesh Chandra is being and will be remembered by the future generations in the WPC as a genuine Indian Patriot and Internationalist, a tireless anti-imperialist peace fighter, a leader of the global peace movement. He will be always in our hearts and minds!