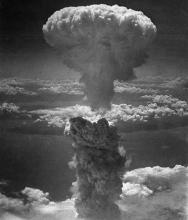 This massive crime against humanity, which has been left unpunished until today, was justified by the U.S. government as a “military necessity,” aimed at bringing about an “early end” to the war. But it is a wellknown and documented fact now that this was not an act in response to “military necessity,” but a wellcalculated move to establish U.S. imperialism’s military supremacy over the rest of the world. Humanity is still threatened by the use weapons of mass destruction, namely of nuclear weapons.

Since the end of World War II, the U.S. government has used its huge nuclear arsenal to threaten, intimidate, and blackmail many nuclear and non-nuclear states. It is estimated that there are more than 20,000 nuclear warheads stored in military installations all over the planet with several thousand installed in military bases and in air and naval fleets, ready to be used.

In view of the seriousness and the threat by the United States to maintain, in its military doctrine, the right to first use of nuclear weapons against non-nuclear States and “agents,” and given the situations of armed conflicts—especially in the Middle East and Africa—generated by the U.S. and other Western imperialist powers, mostly from within the framework of NATO and the E.U., the survival of the whole humanity is being increasingly threatened.

The survival of humanity depends on a world free from all nuclear weapons and other weapons of mass destruction. As necessary steps toward this goal and remembering the Hiroshima and Nagasaki martyrs, the World Peace Council calls for:

• An end to imperialist wars of aggression and respect of sovereignty and territorial integrity of all states and nations;

• Respect for the principles of the UN Charter and the Final Act of the Helsinki Conference by all States, an end to the threat and use of force in international relations, and a universal pledge to a peaceful resolution of international conflicts

• Commitment by all States to full prohibition of nuclear testing and development of nuclear weapons, including a ban on the militarization of space;

• An end to threats of use of nuclear weapons by all nuclear States;