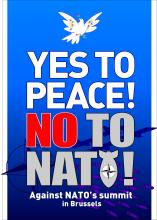 NATO is expanding in Eastern Europe, reinforcing the military presence of the US in Europe and multiplying its «strategic partnerships» all over the world.

The vast network of foreign military bases, the naval fleets, the anti-missile systems and the systems of global surveillance, that the US and its allies in NATO have spread through Europe and the world are instruments of its strategy of imperialist domination – its objectives today are openly offensive and its area of warmongering intervention is the whole planet.

NATO member countries, in particular the US, are responsible for the majority of military spending in the world and for the race to ever more sophisticated armaments, including nuclear weapons and the installation of anti-missile system, serving the interest of military-industrial complex .

US and NATO pressure its members to increase their military expenses, a goal reaffirmed by the Trump Administration – which in the meantime announced an increase in US’ military spending of 54 billion dollars – and already supported by all European NATO countries governments in Wales (September 2014) and in Warsaw (July 2016) using the pretext of the so called “war on terrorism” and the alleged “Russian threat”, to promote an even greater militarization of the European Union and its warmongering interventionism – as NATO’s European pillar.

While in most NATO countries the rights and incomes of workers and peoples are being putt into question and undermined, there seems to never be a lack of funding for arms race and wars.

While the all-around crisis is escalating and the peoples struggle for their rights, for development and progress, for the environment’s protection, the end of poverty and hunger and a fair world, the US-EU-NATO continue to be committed to militarist policies of preparation for war.

NATO intervened directly or supported wars of aggression against the sovereignty of states in Europe, Middle East, Africa and Central Asia. NATO bombed Yugoslavia and is responsible for the destabilization, violence and war that today mark the reality in Ukraine, Syria, Iraq, Libya or Afghanistan. In none of the cases neither the objective nor the result was ever democracy or Peace - the only legacy was terror, death, destruction, chaos and the dominion over resources and profits by big companies from NATO member countries. NATO's so called “war on terrorism” led only to the spread of more terrorism.

NATO sponsored wars are responsible for the drama of millions of displaced and refugees.

The US, NATO and EU warmongering action feeds an escalation of tensions, destabilization and aggression with the real threat of a generalized war that would mean the destruction of humankind.

NATO is the enemy of peace and of the peoples.

But war is not inevitable! The forces of Peace and the peoples have a word to say!

We appeal to all organizations and activists in Europe that defend the cause of Peace, which is inseparable from the struggle against the causes of war, to promote actions against NATO, for the dissolution of this political-military block and in favor of the struggle of each people within each NATO member state for withdrawal from this military organization.

Reaffirming and carrying on the WPC’s campaign “Yes to Peace! No to NATO!”, putting the governments of the NATO member countries in front of their responsibilities, we will develop activities against NATO and against its summit in Brussels and we appeal for the mobilization and initiatives in each country, claiming:

• No to increased military spending for war, devote money to social progress and peace;

• The withdrawal of all NATO forces involved in military aggression and occupations;

• The end of blackmail, destabilization and of wars of aggression against sovereign states and peoples;

• The support to refugees, victims of the wars NATO promotes and supports;

• The closing of military bases in foreign territory and the dismantling of USA and NATO anti-missile system;

• The abolition of nuclear weapons and weapons of mass destruction and general disarmament;

• The opposition to the further enlargement of NATO, namely to the Nordic countries, the Balkans, Eastern Europe and Cyprus;

• The dissolution of NATO;

• The respect of the principles of the founding charter of the UN and of the sovereignty and equality of peoples and States.