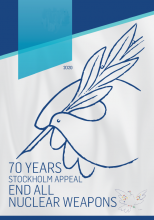 «We demand the outlawing of atomic weapons as instruments of intimidation and mass murder of peoples. We demand strict international control to enforce this measure.
We believe that any government which first uses atomic weapons against any other country whatsoever will be committing a crime against humanity and should be dealt with as a war criminal. We call on all men and women of good will throughout the world to sign this appeal. »
March 1950

In March 1950, seventy years ago, the Standing Committee of Partisans of Peace – an integral element of what would go on to become the World Peace Council, in November of the same year – launched the Stockholm Appeal, a worldwide petition to ban atomic weapons. It collected several hundred million signatures.
The Stockholm Appeal – which included prominent personalities from the world of culture, science and art among its first signatories – resonated with the peoples of the world, now conscious of the US criminal atomic bombings of Hiroshima and Nagasaki in August 1945, and determined that such horrors would never happen again.
The aspiration of putting an end to nuclear weapons united hundreds of millions of people across the world, from different professions, areas of intervention, political opinions and religious faiths. Signatures were collected in factories and offices, in fields and markets, in schools and universities, in associations and clubs, in squares, avenues and streets. In some countries it was necessary to act clandestinely in the face of fascist repression to collect signatures; in others, the Appeal was openly made through major mass action.
The Stockholm Appeal became an immense worldwide affirmation and cry for peace and disarmament, contributing to the limitation of imperialism's most bellicose intentions – namely nuclear capability with which to threaten the peoples.
The success of the Stockholm Appeal and of other peace movement campaigns and actions facilitated further important agreements and treaties aimed at disarmament and détente.
Seventy years after the Stockholm Appeal, the world is facing the danger of the militarisation of international relations, an escalation of the arms race, soaring military expenditure, wars of aggression, destabilization operations and blockades against countries and peoples – a warmongering spiral promoted by US imperialism and its allies, namely NATO, Britain and the EU.
Of particular concern is the abandonment by the US of important international agreements and treaties aimed at limiting the proliferation of nuclear armaments; the colossal budget of the US dedicated to the modernization of nuclear and other weapons of mass destruction and the US nuclear first strike doctrine against other countries, including nuclear-free states – all of which are endorsed and followed by NATO.
Given current nuclear arsenals, a nuclear conflagration would seriously compromise the survival of humanity itself. On the anniversary of the Stockholm Appeal, it is therefore necessary and a task of great urgency to once again unite the peace-loving peoples of the world in demanding:
- the defence and restoration of agreements and treaties aimed at nuclear containment and disarmament
- the rejection of renewed arms escalation, including the installation by the US of any further nuclear weapons in Europe
- the signing and ratification of the Nuclear Weapons Test Ban Treaty, as an important step towards safeguarding peace and security.