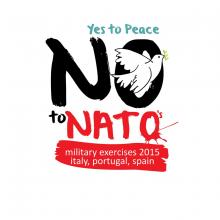 NATO has announced it will undertake large scale military manoeuvres in Spain, Italy and Portugal, from the beginning of October until the beginning of November 2015. These exercises will involve more than 36 000 personnel from the 28 member states of this political military bloc and from other “partner” countries and organizations.
Considered one of NATO's biggest manoeuvres ever, these will take place following USA and NATO military manoeuvres in several other European regions: Baltic Sea, Eastern Europe (Estonia, Latvia, Lithuania, Poland, Ukraine), Black Sea – in a clear and continuous demonstration of arrogance towards Eastern Europeans and namely against the Russian Federation.

NATO declared the goal of building a permanent reaction force of 13000 to 30000 soldiers and a 5000 soldires strong quick deployment force.

According to NATO's Strategic Concept, approved in its Summit in Lisbon in 2010, these forces would not be limited to the defence of NATO members' territories.

NATO behaves as an extension of USA military power, acting according to USA's interests, a tool of aggression against peoples and sovereign states.

One of the announced goals of these manoeuvres is to test NATO's capabilities for military intervention in the Mediterranean, in Northern Africa and the Middle East – remember NATO's aggression against Libya and the decision to use the military base in Morón, Spain, has the headquarters for USA's military command for Africa – AFRICOM – and therefore for its interference in this continent.

At a time that in many countries unacceptable sacrifices and social regression are imposed on the peoples, NATO announces the goal of augmenting military expenditure, it relaunches the arms race and promotes the increased militarization of international relations, of which the dangerous installation of USA's anti-missile system in Europe, the proliferation of its military bases and military presence from Latin America and Caribbean, to the Pacific Far East, are unacceptable examples.

Therefore, the undersigned organizations, committed with the construction of a world of freedom, justice and progress, committed to the ideals of sovereignty and the independence of states, of non interference, non aggression, committed to the peaceful resolution of international disputes, with equality among states, with the abolition of imperialism, colonialism and any other forms of domination. Organizations committed to disarmament and the dissolution of political-military blocs, steadfast defenders of Peace, affirm that:

It is necessary to say no to these warmongering military manoeuvres

It is necessary to demand the dissolution of NATO

It is urgent to build a world of Peace, freedom and justice, with human rights and social progress.