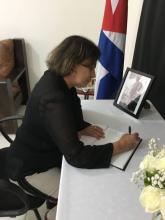 The WPC's president has also written that Fidel is "an enormous exemple of moral integrity and solidarity", stating that his "greatness of spirit inspires us" to move forward in the struggle.

"Eternal glory to the greatest revolutionary humanist of our century, long live Fidel!", she concluded.