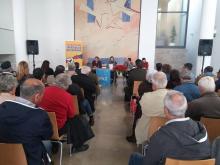 In the framework of the Global Action Day in Solidarity with Venezuela, celebrate last April 19th, the Portuguese Council for Peace and Cooperation developed several initiatives in Portugal, beyond the public statement it widely divulged, namely promoting:
(1) the cosigning of a solidarity text demanding the immediate withdrawal of Obama's Executive order against Venezuela (see below the text promoted by CPPC that has received the support of several Portuguese organizations);
(2) a public session with the participation of the Ambassador of the Bolivarian Republic of Venezuela in Portugal, His Excellency General Lucas Ríncon and of representatives of CPPC and of CGTP-IN.
In this session, once more was reaffirmed the CPPC's and the broader portuguese peace movement's position against imperialism interference in Venezuela and its solidarity with the Venezuelan people, with the COSI (International Solidarity Committee of Venezuela) and other Venezuelan progressive and revolutionary forces and with the Bolivarian Revolution in their path for sovereignty, national independence and social justice, progress, democracy and Peace.

April 19 – World Day of Solidarity with Venezuela
OBAMA, VENEZUELA IS NOT A THREAT
FOR THE IMMEDIATE WITHDRAWAL OF US EXECUTIVE ORDER AGAINST VENEZUELA
We denounce the recent decision by the US President to extend the unfounded and unjust executive order of March 9, 2015, declaring a national emergency "with respect to the unusual and extraordinary threat to the national security and foreign policy of the United States posed by the situation in Venezuela."
We also denounce the sanctions imposed by the United States against the Bolivarian Republic of Venezuela, the Nicolás Maduro government and the Venezuelan people, which were now equally reaffirmed.
We join the World Day of Solidarity with Venezuela - which is marked for April 19, 2016 - demanding the immediate repeal of the executive order of the United States against the Bolivarian Republic of Venezuela and the end of the action of interference against this Latin American country.
We recall that millions of people, including many Portuguese, condemned in a petition - which gathered over 14 million signatures - the unacceptable interference by the United States in the internal affairs of a sovereign State, demanding the repeal of the executive order against Venezuela.
We join all those who demand that the US Administration respect the self-determination of the peoples, their right to freely decide their path, as enshrined in the UN Charter.
We express our solidarity to the Bolivarian Republic of Venezuela and the Venezuelan people, to President Nicolás Maduro and all the forces defending the sovereignty and independence of Venezuela and social progress and peace for its people.
The undersigned organisations:
Associação de Amizade Portugal-Cuba
Associação Conquistas da Revolução
Associação Portuguesa de Amizade e Cooperação Iúri Gagárin
Confederação Geral dos Trabalhadores Portugueses – Intersindical Nacional
Confederação Portuguesa das Colectividades de Cultura Recreio e Desporto
Conselho Português para a Paz e Cooperação
Ecolojovem - «Os Verdes»
Federação dos Sindicatos de Agricultura, Alimentação, Bebidas, Hotelaria e Turismo de Portugal
Associação Intervenção Democrática
Juventude Comunista Portuguesa
Movimento Democrático de Mulheres
Mó de Vida – Cooperativa
União dos Sindicatos de Lisboa / CGTP-IN