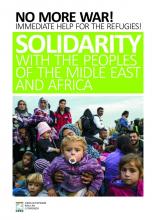 Solidarity with the peoples of the Middle East and Africa!

The drama and suffering of millions of children, women and men that run from war, death, hunger, disease ​and the most degrading living conditions, has causes and those responsible.

The overwhelming majority of those that today travel to Europe, and that for long have been refugees in neighbouring countries, come from countries of the Middle East and Africa — such as Syria, Libya, Iraq, and Afghanistan — that were and continue to be destroyed and pillaged, by economic policies and wars, promoted and enacted by the US and its allies in NATO, the European Union and the Middle East.

This immense humanitarian tragedy, first of all, results from that warmongering policy that have promoted aggressions and wars, including in Europe, with its list of death and destruction.

The inadmissible criminalization and repression of refugees exposes them to insecurity and exploitation, and constitutes fertile ground for racism and xenophobia, ideas that promote the growth of fascist and neo-nazi forces, and its crimes, as Europe has witnessed.

It is necessary therefore to put an end to wars of aggression, aid the millions of refugees, act with solidarity with the peoples and respect the sovereignty of states.

- Denounce the true causes and those responsible for this humanitarian tragedy;
- Repudiate any attempt to take advantage of the consequences of ware to foster heightened and new wars of aggression;
- Appeal to the fulfilment of the principles enshrined in the United Nations Charter and the Portuguese Constitution, aiming the end of interventions and wars of aggression, the urgent aid to refugees and the populations of affected countries, the support to assaulted countries in the Middle East and in Africa and the funnelling the money used in the arms race, militarism and war into the effect cooperation and development aid.