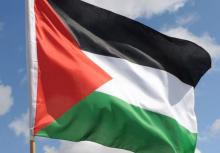 The WPC is expressing its serious concerns about the accelerating offensive of the Israeli occupation regime in Palestine, with the continuation of the settlements in the West Bank, the arrests and harassments of Palestinians, even of children and the rhetoric and efforts for the judaization of Israel, along with the impasse of the negotiations for a solution in the Palestinian problem because of the Israeli side, which is receiving full backing from the USA and the EU.

Additionallly to the above the state of Israel is keeping more than 6.500 Palestinian prisoners, amongst them children, women, parliamentarians, activists, journalists, human rights defenders, academics, political figures, militants, bystanders, family members of prisoners. The recent weeks a hunger strike of several hundreds of these prisoners hast started and is going on. The WPC demands the release of all the Palestinian political prisoners from the israeli jails and expresses its solidarity to their just cause.

The struggle of the Palestinian people for their inalienable rights to an independent viable State within the borders of pre 4th June 1967 and with East Jerusalem as its capital along with the release of the political prisoners and the right for the return of all the Palestinian refugees (according to the UN resolution 194)deserves and demands our full support and solidarity. We express at the same time our solidarity with the consequent peace loving forces inside Israel, who struggle against the occupation by the reactionary regime and against the “apartheid” like discrimination of Arab origin citizens. As WPC we denounce the double moral and ambiguous policies of the EU and of the majority of its governments who do not recognize Palestine as an independent State or issue resolutions and wishes while being accomplices to the crime against the Palestinian people.