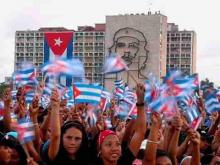 The Portuguese Council for Peace and Cooperation (CPPC) strongly condemns the recent decisions buy the US president to strengthen the blockade against Cuba, namely by reverting some measures, that although insuficient, had been put forward by the previous US Administration. Now it will again become harder for US citizens to travel to Cuba and new restrictions on comercial trade with the island have emerged.
Restating its longstanding solidarity with Cuba and its people the CPPC inists that only the respect for the sovereingty of States and peaceful coexistence between countries promote stability and social progress. CPPC recalls that USA’s blockade against Cuba – over half a century old – is illegal and repudiated by practically every country in the world, has demonstrated by successive votes in the United Nations General Assembly.
Beyond the demand for ending the economic, finatial and comercial blockade, CPPC reaffirms its solidarity with the Cuban Movement for Peace and the Sovereignty of Peoples and also to the Cuban people in their demand for the return of the territory ocupied by the US’s military base of Guantanamo, and the respect for their sovereign decision to choose their own path, greeting their decedes long struggle for sovereignty, social progress and peace.
June 22nd 2017
CPPC National Leadership