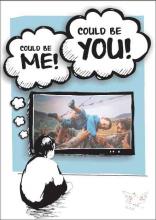 The organizations present at the European Regional Meeting held in Portugal in March, decided to promote in their countries solidarity initiatives with the refugees and against war, denouncing that this crisis has causes and those responsible.
One of the initiatives decided were to hold a day of solidarity actions on May 16th.
The organizations present at this Meeting approved the text “No to war! Solidarity with refugees!”.
In this framework, the organizations decided the designing of a flyer by the Portuguese Council for Peace and Cooperation (CPPC).
Please find bellow the text approved and the flyer produced by CPPC.

The continued and prolonged encroachments and wars of aggression led by the US, NATO and their allies, in the Middle East, in Africa, in Central Asia and in Europe provoked an unprecedented humanitarian crisis, also expressed as dozens of millions of displaced and refugees, hundreds of thousands of which seek asylum in European Union countries.
The action of the European Union and its member States regarding refugees is a grave attack upon human rights and represents an unacceptable setback: with the construction of effective "walls" on its borders; with the confiscation of the assets of refugees; with the creation of camps without the minimal conditions of for housing; with the refusal of providing the more elementary care, without respect for the dignity of of hundreds of thousands of children, women and men, many of which are victims of criminal networks.
This violent and inhumane escalation has worsened with the decision taken by the European Union, under the pretext of "protection of the external borders of the UE, reinforcing the repressive measures, of administrative, police and military character, including the grave agreement between the EU and Turkey, attempting to stop the entry and promoting the expulsion of refugees, and highlighting the "fortress europe" nature of the EU.
Equal gravity assumes the decision of the European Union of attributing to NATO, in collaboration with the FRONTEX Agency, the control and policing of the Aegean
Sea and the borders of countries that integrate the EU, using the dramatic situation of the refugees to reinforce the presence of NATO in the Mediterranean, increasingly militarizing the region.
We consider that these actions represent the continuation of our policy of aggression against peoples that, with intrusions and war, created the chaos in the countries of origin of refugees, which demonstrates the real nature of the European Union policies.
The EU policies are responsible for the promotion and the growth racism and xenophobia and the reactionary and extreme-right forces that give them expression.
The policies and actions will increase the humanitarian crisis, which will only having solution when the intrusions and wars of aggression end, when the principles of the UN charter are respected, namely the sovereign right of peoples to decide their destiny and live in peace.
Given the dramatic situation of million of refugees, the WPC European Regional Meeting, held in Almada, Portugal on 19 and 20 of March:
1. Condemns the policies and practices of encroachment and war by the US, NATO and their allies that destroyed sovereign States and are the origin of such a high number of refugees, reaffirming that it is urgent and imperative to end the wars of aggression in the Middle East and Africa, promote political negotiations that find solutions to conflicts, and the cooperation, supporting the economic and social development so that refugees have conditions to return to their countries of origin;
2. Repudiates the inhumane measures of the European Union aiming the creation of a fortress Europe, reject the intervention of NATO in the Aegean Sea, the creation of walls, securitarian measures that attack fundamental rights, liberties and guarantees, and demands that all countries respect the United Nations charter and the international legislation that protects the right of refugees;
3. Appeals to the realization of actions that give public expression to the repudiation of wars of aggression in the Middle East and in Africa, and the demand for the end of repressive and militarist measures against refugees, defending solidarity, the support and respect for their rights and human dignity.