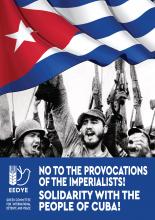 The Greek Committee for International Detente and Peace (EEDYE) denounces the actions organized by the imperialists in recent days in order to cause political destabilization in Cuba. The United States, along with the mafia and other counter-revolutionary forces inside Cuba, are taking advantage of shortages due to the 60-year blockade on imported goods, basic necessities, and constant power cuts by organizing protests and calling for the overthrow of the government.

The US and the EU hand in hand, dare to present themselves as so-called protectors of democratic rights, at a time when they are intensifying repression, the surveillance of citizens, limiting and restricting even basic popular freedoms, introducing the so-called anti-terrorism laws and constantly recruiting old and new pretexts to turn against the peoples and their struggle. It is provocative for the US, the EU, but also for their supporters in Greece to talk about peace, democracy, freedom, when they establish US-NATO bases and infrastructures from one end to the other, when they are responsible for a series of interventions - bloodshed of entire peoples in order to secure the profits of their business groups.

The Biden administration continues its criminal, inhumane policy of blocking Cuba, killing the Cuban people on a daily basis. It maintains the 243 additional measures of the Trump administration, which lead to further suffocation of the Cuban people. Jo Biden even states that he does not intend to change his policy towards Cuba. The illusions for a more popular friendly Biden government, which had been cultivated in our country by political forces such as SYRIZA and MERA25, are collapsing once more, since the "hope" they were talking about turned out to be a real danger not only for the Cuban people, but for the peoples of the world. These political forces bear criminal responsibilities because they wash away US imperialism at every opportunity.

The heroic people of Cuba, for sixty years, despite the economic strangulation due to the blockade, despite the shortcomings in basic needs, do not give up! The superiority of socialism is highlighted by Cuba, which despite the difficulties, although Cuba is literally located in the "mouth of the wolf", has managed to secure achievements that even the developed capitalist countries are unable to provide to their peoples. The Cuban people have prevented by their struggle countless imperialist provocations like the current one; while at the same time give to the world glorious lessons of international solidarity and dignity. At a time when imperialists are creating bloodshed to countries, Cuban doctors are organizing missions around the world to help people suffering from diseases and natural disasters. Even during the pandemic, Cuba helped with medical missions to countries around the world, while at the same time, despite the extremely difficult conditions, Cuba develops its own vaccines, with the commitment to help the poor and oppressed peoples of the world.

EEDYE expresses its full solidarity with the heroic people of Cuba and their revolution. We express our support to the Cuban Peace Movement (MOVPAZ). We demand the lifting of the blockade and all sanctions against Cuba.
No to imperialist provocations! Cuba is not alone! Cuba will win!