«Mike Pompeo and Benjamin Netanyahu are not welcome to Portugal» was, more than the motto, the outcry that emerged from the public action carried out at the end of the afternoon, December 6, at Largo Camões, noble space of Lisbon, already well known for the initiatives in defence of peace that regularly take place there.

The visit of the US Secretary of State and the still Israeli Prime Minister stirred different concerns and causes into converging action: from the opposition to war and militarism to the defense of disarmament and the dissolution of NATO; solidarity with peoples threatened and attacked by American imperialism and Israeli Zionism; the rejection of racism and xenophobia and the safeguarding of the environment and natural resources. These and other matters were addressed by the speeches of the representatives from three of the organizations promoting the action, Portuguese Council for Peace and cooperation, Portuguese Movement for the Rights of the Palestinian People and Peace in the Middle East and the General Confederation of Portuguese Workers and also the Colombian political refugee Hector Mondragon.

Dignity was also addressed, that of the Portuguese people, who freed themselves from fascism 45 years ago and opened up in solidarity with the world. A people that made a profound revolution whose main achievements are reflected in the Constitution of the Portuguese Republic, April’s Constitution, which in foreign policy enshrines principles such as the defense of peace, the peaceful solution of conflicts, respect for the sovereignty of states, disarmament , the dissolution of political-military blocs.

Precisely the opposite, therefore, of what António Costa (Portuguese Prime Minister) and Augusto Santos Silva (Portuguese Minister of Foreign Affairs) did when "offering" national territory for a summit between Pompeo and Netanyahu, where the deepening the occupation of Palestine and a future war against Iran were discussed. Immediately to mind comes the shameful Lajes summit in 2003, which prepared the aggression against Iraq and for which the then Prime Minister Durão Barroso was awarded the post of President of the European Commission and, later, with a place in the administration of the Goldman Sachs bank. But also the memory of the courageous affirmation of sovereignty that constituted, in 1979, the holding in the country of a world conference on the Middle East and Palestine, which brought to Portugal the historical leader of the Palestinian resistance, Yasser Arafat, received with state honors by general Ramalho Eanes and Maria de Lurdes Pintassilgo, at that time President of the Republic and Prime Minister, respectively.

Largo Camões' action also served this purpose: so that the name of Portugal is not associated only with submission and subservience to imperialism, but also with the dignity of a people who are, and affirms it, «on the right side of history »: The side of peace, cooperation, solidarity with peoples.

I begin by saluting, on behalf of the Portuguese Council for Peace and Cooperation, the remaining organizations promoting this initiative, the artists Tiago Santos and Sofia Lisboa - who provided us with a beautiful moment of song and struggle - and, in particular, all those here they made a point of being present, to state loudly that Michael Pompeo and Benjamin Netanyahu are not welcome in Portugal!

Everyone who is here, and there are so many of us, we also show that the Portuguese people, unlike the Portuguese Government, are not subservient and submissive to those responsible for war crimes, military aggression and coups d'état, massacres and blockades, by the worsening of international tension, environmental degradation and the diversion of astronomical sums that would solve many of the most serious problems that affect humanity.

But we are all here, demanding peace, respect for the freedom and sovereignty of peoples, for democracy, for the respect of international law. We are here, in Lisbon, on our own behalf, but also for the peoples who resist wars, blackmail, threats from the USA and its allies. In Latin America, in the Middle East, in Africa, in Asia, all over the world!

Michael Pompeo, one must not forget, is one of the most responsible within the Trump administration with its policy of military escalation and confrontation, that attacks sovereignty, democracy and international law and drags the world into great danger. Michael Pompeo represents the most reactionary and warmongering sectors installed in the American administration.

We are here in defense of peace and disarmament, against NATO, that warmongering structure responsible for wars and aggression that reduced to rubble what were once countries; that leads the race to increasingly more sophisticated and destructive weapons, using new technologies such as artificial intelligence, which militarizes the Cosmos and cyberspace; NATO militarily encroaches the Russian Federation and China, identifying them as their strategic opponents, endangering peace and security in the world.

NATO, and Michael Pompeo's USA, increase and modernize their nuclear arsenal, assume the possibility of using this type of weaponry in a first strike even against countries that do not have these weapons and boycott the entry into force of the Nuclear Weapons Ban Treaty, which we remember has not yet been signed by Portugal, because, according to Santos Silva, commitments to NATO are more important.

We are here in solidarity with the peoples of the Middle East - in Syria, in Yemen, in Iraq - who daily suffer the consequences of US aggressions and their endless list of dead, wounded, maimed, orphans and refugees, of destroyed schools and hospitals , of countries reduced to rubble. We are also here to state that we do not want war against Iran, as seems to be the wish of Netanyahu, Pompeo and Trump.

We are here in solidarity with the peoples of Latin America, who fight for progress and social justice, which there, more than in other places, implies the struggle for sovereignty against secular American domination.

Let us remember that it was this administration, of which Pompeo is a member, that clearly and openly resurrected the Monroe Doctrine, with which the USA attributes itself dominion over Latin America's wealth and resources.

We are here in solidarity with the peoples of Cuba and Venezuela, Bolivia and Colombia, Chile and Brazil, Nicaragua and Haiti.

We reject the subservience and disrespect for international law of a Portuguese Government that recognized the puppet of the United States of America to attack Venezuela, Guaidó, a subservience that Pompeo came to Portugal to thank.

We stand here in solidarity with all the peoples of the world, also with the people of the United States, against the racism and xenophobia that are the hallmark of the administration of which Pompeo is part of; we are here to raise our voices in defense of peoples' rights to sovereign development, to their natural resources, threatened by big transnational companies and big powers, with the USA at the head.

Can someone like that be welcome in our country, in the Portugal April’s Revolution? Can such a sinister personality be received with honors, smiles and friendly handshakes by the governors of a country that, in its Constitution - the April Constitution -, advocates the defense of peace, equality between states, disarmament and the dissolution of the political-military blocs? A constitution that rejects colonialism, imperialism and any other form of domination over countries and peoples?

The answer is clearly No!

Shortly after Mike Pompeo's visit to our country was known, it became known that Benjamin Netanyahu would also come. And the multiple reasons we already had for today’s gathering, quickly multiplied, or is not Netanyahu one of the main responsible for the daily drama of the Palestinian people: for Gaza’s siege and for the massacres and recurrent bombings of the Palestinian population; for the construction of new settlements in East Jerusalem and the West Bank and the expulsion of people from their homes and lands; for the arrest of hundreds of children.

Can you receive with honors in Portugal he who assumes the intention to continue and expand the occupation of the Palestinian territories? He who has thousands of dead on his CV, many of them children? Who openly disrespects United Nations resolutions every day? In fact, the meeting of Pompeo and Netanyahu in our country is bad news for the people of Palestine, as we cannot forget how the current American administration recognized Jerusalem as the capital of Israel and, and a few days ago, recognized that the Israeli settlements are “not illegal”.

We do not want anyone to associate Portugal with this image of subservience and complicity with US imperialism and Zionism. Not in our name!

That is why we are here today saying that the Netanyahus and the Pompeos of this world are not welcome in our country, that Portugal - its people - stands with the peoples that suffer and resist and not with their executioners, that April’s Portugal, supportive and peace-loving, is alive!

Leia a intervenção do CPPC: 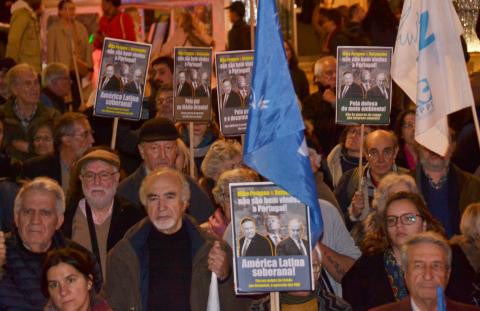 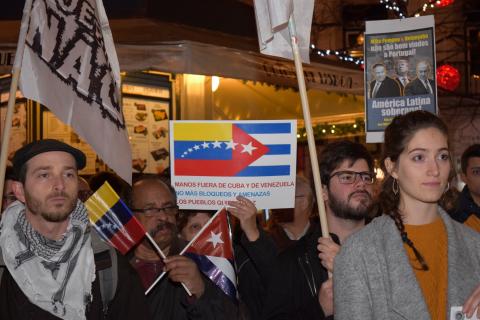 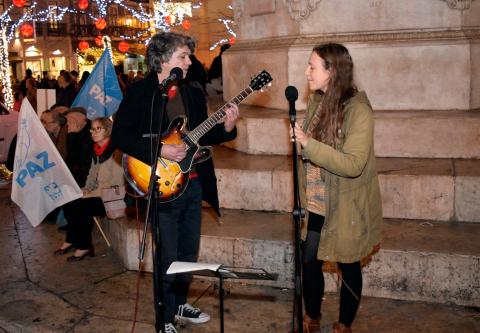