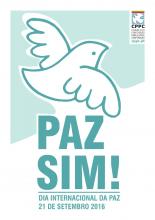 Seldom before, as the time we live in, it has been so important to celebrate the International Day of Peace - proclaimed in 1981 by the United Nations - given the multiple and serious threats to peace which the people, which Humanity is currently facing.
It is impossible not to see the growth of militarism, the race for new and more sophisticated and destructive weapons, including nuclear, installation of new forces and military means, that the United States and NATO are promoting in Europe and around the world - countries that alone already account for about half the military spending in the world.
Several operations of interference and destabilisation against sovereign states, wars of aggression and occupation, are taking place in various parts of the world, whether in the Middle East, Central Asia or Africa, and also in Europe - Afghanistan, Iraq, Libya, Syria, Yemen, Ukraine ... are words that have entered our everyday lives and in these countries represent death, suffering and destruction for millions and millions of human beings.
Interferences and wars, that is impossible not to see, have in common at their origin, the action of the US, NATO and their allies. Interference and war with which, after all, they seek to ensure the geostrategic control of important regions and the main sources of raw materials, notably oil, and restrain or destroy any state, any country they consider an obstacle to their intents.
The stunning and dramatic wave of refugees - the largest since World War II - caused by the various wars of aggression carried out particularly in Syria, Iraq, Libya and Afghanistan, is there to denounce the deeply inhumane and violator of fundamental human rights of these military operations of aggression, of war, presented at the time as "humanitarian”.
Also worrying is the continuous and increased tension against the Russian Federation and against China as part of this bellicist escalade, evident in the concentration of NATO forces in Eastern Europe and the installation of the “anti-missile” systems in Europe and in the Korean Peninsula, in the proliferation of military bases and installations and deployment of US military forces to the Pacific.
These are some of the most troubling features that mark the current international situation, along with the growth of poverty and inequalities in many countries of the world, where millions of children, youth, women and men are deprived of access to their rights, right to a decent life.
On this International Day of Peace, the Portuguese Council for Peace and Cooperation reiterates its call to all those who sincerely defend peace, to unite around the principles proclaimed in the UN Charter and the Constitution of the Portuguese Republic.
Principles which have as essential values the defence of national sovereignty and independence, of non-interference in internal affairs of States, in the peaceful settlement of international conflicts, of cooperation among countries to promote the emancipation and progress of Humanity.
Principles present in the aspiration of the peoples to end of all forms of colonialism and national domination, in disarmament, in the dissolution of political and military blocs, in the recognition of the right of the peoples to self-determination.
Principles that is urgent to turn into reality, like fraternity, solidarity, cooperation.
It is the restoration and exercise of these values in international relations that will pave the way to peace, the way for which people and Humanity yearn and need.
It is for these principles, which have always guided its activity, that the CPPC will continue to intervene, contributing to broaden the unity and convergence in Portugal and internationally, appealing to all those agree with them to give more strength to the pressing struggle for peace, participating in CPPC’s actions and, if they so wish, join the peace movement.
Calling for the participation in initiatives that evoke the International Day of Peace, the CPPC reaffirms that peace is in the interest of all and to uphold the cause of peace we are never too many!