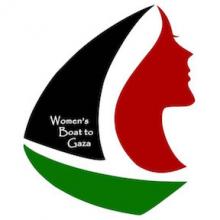 The Brazilian Center of Solidarity with the Peoples and Struggle for Peace (Cebrapaz) expresses its concern and revolt for the interception and abduction by Israeli naval forces of women activists for peace that are in a mission against the blockade of Gaza by Israel, in the Women's Boat to Gaza, on Wednesday (5 October 2016), when they approached the Palestinian territory, which is under siege since 2007.
We reply to the call and emergency messages from more than 10 members that have pre-recorded them due to anticipated repression by Israel of the mission to break the blockade. These women represent the five continents, coming from Spain, the USA, Sweden, Malaysia, South Africa, Australia, among others, and have embarked on a peaceful action of protest to reach the besieged Gaza Strip, to expose the impact of this criminal and brutal blockade on the lives of Palestinians.
The mission should reach Gaza on October 5, but as other flotillas that tried to reach the besieged Palestinian territory since 2010, it faces intimidation from Israeli forces. The Women's Boat to Gaza is part of the International Freedom Flotilla Coalition, formed in 2010 by social movements around the world to denounce the blockade of Gaza through non-violent resistance. That year, however, the truculent approach by Israeli forces against the Turkish boat Mavi Marmara that was part of the flotilla resulted in the deaths of 10 activists.
The mission calls on governments to take action against the illegal blockade of Gaza and its action also aims to support the Palestinian people in their right to resist oppression and injustice. Now their call is also for pressure on the Israeli government to release them, so they can continue their journey to Gaza.
We transmit the appeal to all those who show solidarity with these women in their action and with the Palestinians in their resistance to Israeli occupation, demanding the release of the Women's Boat to Gaza, in Palestinian waters, until they reach Gaza, which has always been the mission's destination.
The Israeli Army's spokesperson Peter Lerner is reachable through phone number +972 252 945 2966, and the chief of staff (Lieutenant General) is Gadi Eizenkot, who can be contacted through [email protected] and [email protected]
The UN Secretary-General Ban Ki-moon can be contacted via email, at [email protected]
We support the courageous mission of solidarity with the Palestinian people and reaffirm our full solidarity with the Palestinians' unwavering struggle against the Israeli occupation and the criminal blockade of the Gaza Strip!
Release the Women's Boat to Gaza!
Free Palestine and the Palestinian people!