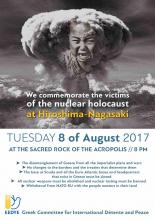 Seventy two years have passed since the crime of the imperialist USA against the people of Japan, against the thousands of people in Hiroshima and Nagasaki whom the nuclear mushroom wiped off the face of the earth (6 and 9 August 1945). The material damages were enormous, with both of the US’s target cities were levelled. The real targets were the peoples, the USSR, and the rising revolutionary and labour movement. To this day, imperialist propaganda is still trying to conceal the real targets, using the lie of “military necessity” to justify these crimes, when the imperialist World War II was already over!
We are currently going through an extremely dangerous period for the Greek people, and for all peoples of the earth. Inter-imperialist rivalries and conflicts are becoming more acute over the entire planet, in the Middle East, North Africa, the Eastern Mediterranean, Ukraine, the Balkans, the Persian Gulf. The military-political plans of the imperialist centres are being advanced for the control of the markets, the natural resources and energy resources. The possibility of a “First Nuclear Strike”, which was examined after many years in the framework of NATO, was confirmed at the NATO Summit in Warsaw (July 2016) and is a threat for the peoples. The decisions of the NATO Summit in Brussels (May 2017) accelerated the implementation of their murderous plans, with the reinforcement of NATO forces from the Baltic to the Black Sea in the context of the dangerous competition with Russia, as well as the intensification of NATO’s involvement in Syria. We are particularly concerned about the developments around the Cyprus issue, the firepower that is being concentrated around the Gas drilling operations and the dangers being created for the Greek people.
The responsibilities of the SYRIZA-ANEL government (and of the other bourgeois parties) are enormous because its policy is further deepening our country’s involvement in imperialist interventions and wars, drawing our people into new hazards. At the same time, in a period of austerity for the entire Greek people, it is devoting enormous sums to military spending in the context of NATO planning.
EEDYE calls for mass participation in the rally and demonstration on Tuesday 8th of AUGUST at the Sacred Rock on the Acropolis at 8 pm and a march through the historic centre of Athens. Through our participation we will denounce decisively the US crime at HIROSHIMA and NAGASAKI and commemorate the victims of this atrocity.
We are fighting for and we demand:
• The disengagement of Greece from all the imperialist plans and wars
• No changes to the borders and the treaties that determine them
• The military base at Souda and all the Euro-Atlantic bases and headquarters that exist in Greece to be shut down
• All Greek military forces that are abroad and participate in NATO and EU operations must return home
• All nuclear weapons to be abolished and nuclear testing must be banned