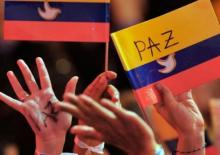 Recall that in the framework of the peace negotiation process that occurred in the Cuban capital, four years ago, and as a gesture of good will, the FARC-EP had already declared a unilateral cease-fire on July 20th 2015, but the process, that involves the resolution of many problems, has only now been concluded, giving place to the bilateral and definitive cease-fire.

However, for the process to be concluded there are sill several stages and important guarantees to achieve and ensure.

The president of Colombia presented the peace accord to Congress.

The FARC-EP promote, on September 13th-19th, the 10th National Guerrilla Conference, in San Vicente del Caguán (Southwest Colombia), where the accord should be ratified and the passage from a guerrilla to a political movement discussed.

FARC-EP also underline that "the Colombian political regime agreed with the FARC-EP on the end of the war and committed, solemnly before the national and international community, to open the doors to democracy in the country and institute justice in social relations", and expresses the desire that "never again may the weapons of the Republic point their cannons against its people. That an uprising be never necessary again." CPPC values the peace accord, underlining the role of Cuba, as well as other parties involved, and hopes that its fulfillment occur as planned, so that peace may return to Colombia and that its people achieve the democracy, justice and social progress to which they are entitled.

August 29th, 2016
Portuguese Council for Peace and Cooperation's National Board