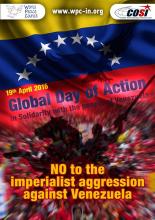 The democratic and left organizations, social movements and personalities, in the world, express our strong support and firm solidarity for the VENEZUELAN PEOPLE, the Government of the Constitutional President Nicolas Maduro Moros, the Communist Party of Venezuela, and the Committee of International Solidarity (COSI), member organization of the Executive Committee of the World Peace Council (WPC), victims of a new abominable and interventionist escalation by US imperialism which is the prelude to a declaration of war.

The "Executive Order", renewed on March 3rd 2016 by President Barack Hussein Obama of the US, extends and expands the possible actions of the biggest aggressor State against sovereignty and self-determination of people and the political and social process in Venezuela, in which a "national emergency" against an alleged "unusual and extraordinary threat to national security and foreign policy of the US" is declared.

This action represents an act of provocation and interference that violates international law, Human Rights and the peace of the Bolivarian Republic of Venezuela and the entire Latin American and Caribbean region.

We denounce that such actions are aimed at destabilizing popular developments, especially in Venezuela, and the process of changes affecting the entire Latin America and the Caribbean region, in a attempt to reconstruct the imperialist hegemony and geostrategic control of the US.

In a new international escalation of the Venezuelan bourgeoisie, dependent on the interests of imperialism and in concert with its allies of the international extreme right, three days after the action of Obama, one spanish and 26 latin american former presidents requested the application of a perverse mechanism of the Organization of American States (OAS), to punish our nation where there wasn’t a breaking of the constitutional order.

While our people yearn to build a sovereign and independent way of development, social justice and peace, the imperialism promotes coups, bloody military occupations and violates Human Rights.

In 2015, together with the peoples of the region, Venezuela appointed Latin America and the Caribbean a Zone of Peace, rejecting the use of nuclear weapons and demanding the withdrawal of US military bases.

Currently, 74 US military bases are surrounding Latin America and the Caribbean, and its weapons of mass destruction aimed at the processes of sovereignty and self determination of our peoples.

Thirteen of these bases encircle Venezuela. Billions of dollars from drug and US capital are diverted to found organizations such as the United States Agency for International Development (USAID) and the National Endowment for Democracy (NED), which promote and organize the neofascist groups destabilizing the democratic and popular governments, like the constitutional government of the Bolivarian Republic of Venezuela.

Even the Libertador Simon Bolivar warned, on 5 August, 1829, when he stated in a letter to the Minister Charge d'Affaires of Her Britannic Majesty in the United States, Patrick Campbell: "The United States seems destined by Providence to plague America with misery in the name of Freedom".

While the Obama administration and its NATO allies favor deregulation of employment, layoffs and worsening of fundamental rights, bringing their citizens closer to the edge of misery and death, Venezuela, in response to the crisis of the world capitalist system, has achieved the claim of political, social and economic rights of workers, the working class and popular majorities historically excluded.

Based on these recitals, the democratic and left organizations, social movements and personalities agree:

- Express our full and active solidarity with the Venezuelan People, the Government of the Constitutional President Nicolas Maduro Moros, the Communist Party of Venezuela, and the Committee of Solidarity International (COSI), member organization of the Executive Committee of the World Peace Council (WPC), victims of a new and more dangerous aggression by the government of the United States.
- Demanding the repeal of the new, infamous and interventionist decree signed by President Barack Hussein Obama against the Bolivarian Republic of Venezuela.
- To join, as we did last year, the call and declare April 19th as "GLOBAL DAT OF ACTION IN SOLIDARITY WITH VENEZUELA".
- Convene all social movements and organizations that bring together and represent the working class and working people, to demonstrate on the 1st of May their militant solidarity with Venezuela.
- Promoting in all parliaments in the world motions and actions aimed at a forceful rejection of interventionist actions against Venezuela and its legitimate right to self-determination and sovereignty.
- To denounce and reject the concerted terrorist action by a group of one spanish and 26 latin American former extreme right presidents, who demanded of the Organization of American States (OAS) the application of the impermissible Inter-American Charter against the will of the people of Venezuela . 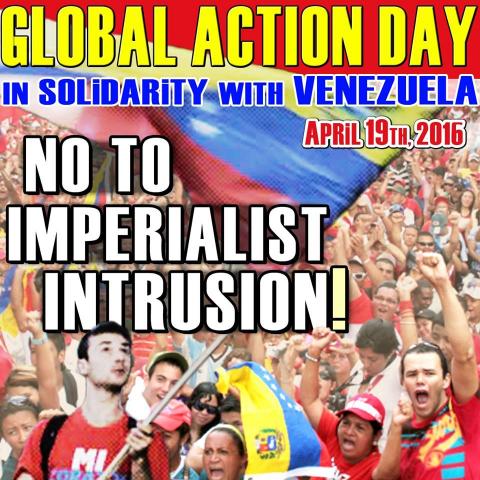