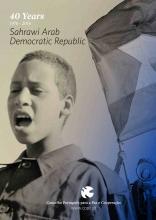 On February 27th of 1976, in the city of Bir Lehlu, free territory of Western Sahara, the POLISARIO Front, in representation of the Sahrawi people and respecting Resolution 1514 approved by the United Nations, proclaimed the constitution of a free State, independent and sovereign named Sahrawi Arab Democratic Republic, assumed the responsibility of recovering the territorial integrity and the sovereignty of its homeland,
militarily occupied ​the previous year by the Kingdom of Morocco. ​

​The ​Sahrawi Arab Democratic Republic​ is recognized by more than a hundred States and by the African Union.​

However, a significant part of the Sahrawi people is forced to live, for more than 40 years, in refugee camps in the south of Algeria.

The decisions of the United Nations are disrespected by the power occupying Western Sahara - the Kingdom of Morocco - which counts on the support of the US and the European Union.

The CPPC salutes the 40th Anniversary of the
Sahrawi Arab Democratic Republic​ and reaffirms to the Sahrawi people and the Polisario Front - its legitimate representative - its solidarity towards their struggle to recover the right to live in their free and sovereign homeland​.

The CPPC condemns the disrespect for the rights, and the violence exercised by the Kingdom of Morocco upon the Sahrawi populations residing in the occupied territories.

​The CPPC demands that the UN and other International Organizations respect and enforce the respect for International Law enshrined in the numerous Resolutions approved by the United Nations.

The CPPC asks that the Portuguese Government and the Parliament, in respect for article 7 of the Portuguese Constitution, ​intervene actively so that the inalienable rights of the people of Western Sahara to a free, sovereign and independent homeland be respected.

National Leadership of the CPPC