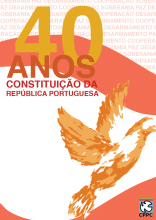 On April 2, 1976 the Constitution of the Portuguese Republic was adopted and promulgated establishing broad democratic rights - political, social, economic and cultural - achieved by the Portuguese people with the April Revolution, begun on April 25, 1974, pointing, namely, a course for the foreign relations of Portugal based on respect of sovereignty and national independence, a policy of peace, friendship and cooperation with all peoples of the world.

The April Revolution was an expression of the sovereign will of the Portuguese people, of assumption of their own destiny, without foreign interference.
This powerful affirmation of sovereignty and independence transformed Portugal under the fascist and colonialist dictatorship into a democratic country, with its own voice on major international issues, in line with important constitutionally enshrined principles, such as those listed in Article 7 of the Portuguese Constitution:

"1. Portugal is governed in its international relations by the principles of national independence, respect for human rights, the rights of peoples, equality between States, the peaceful settlement of international conflicts, non-interference in the internal affairs of other States and cooperation with all other peoples with a view to the emancipation and progress of mankind
2. Portugal advocates the abolition of imperialism, colonialism and any other forms of aggression, domination and exploitation in the relations between peoples, as well as simultaneous and controlled disarmament, the dissolution of political-military blocs and the establishment of a collective security system, with a view to creation of an international order capable of ensuring peace and justice in the relations among peoples.
3. Portugal recognises the right of the peoples to self-determination and independence and to development, as well as the right of insurrection against all forms of oppression”.

We have to remember that the April Revolution made a decisive contribution to end the brutal and unjust colonial war imposed by fascism on the Portuguese people and the African peoples and towards the achievement of the independence of the peoples of the former Portuguese colonies. The April Revolution recognised and enshrined equality between countries and peoples. April opened, also, the path to a sovereign foreign policy of peace and cooperation, to break with the submission of the country to the warmongering and aggressive logic and turned Portugal into an active promoter of international peace and security. The April Revolution recognised the right of peoples to decide their destiny and fight for their liberation and emancipation. With the April Revolution, Portugal became an active part in building a fairer and more peaceful world - these are the values that the Portuguese Constitution enshrines.

However, successive governments’ policy was not in line with the advanced content of the Constitution, by binding the country to NATO´s political and warmongering action, strengthening and enhancing its aggressive nature, destabilization operations and wars of aggression against other peoples. On many occasions, the important principles set down in the Constitution have been infringed in the name of «commitments» to NATO or the European Union - in all these moments, the peace movement raised its voice in protest and demanded respect for the Constitution and the April values in it written, as well as for the principles of the United Nations Charter and international law.

The Portuguese people have always expressed their solidarity with the peoples in struggle against war, occupation and oppression.
When celebrating the 40th. anniversary of the Portuguese Constitution, we recall that the Portuguese Council for Peace and Cooperation (CPPC) - created under fascism and heir and continuer of the Peace movement of the early 50s has fought consistently for peace, disarmament and solidarity - formalised its legalization on April 24, 1976.

The proximity of dates is no coincidence. Both the Portuguese Constitution and the legal formalisation of the CPPC are the result of the April Revolution, of its profound changes, of aspiration and struggle of the Portuguese people for freedom, democracy, sovereignty, social progress and peace.

Affirming the path pointed by the Constitution - particularly in the first three points of Article 7 - the Portuguese Council for Peace and Cooperation today continues its determined action to promote Peace, security and international cooperation, friendship and solidarity among peoples. The CPPC assumes as its own the causes of dissolution of political and military blocs, NATO, the end of nuclear and mass destruction weapons and of foreign military bases, respect for the sovereignty of States and the right of peoples to define their own destiny.

In times of new threats and dangers to Peace, the CPPC trusts the righteousness of its principles, the principles enshrined in the Portuguese Constitution, and reaffirms its same commitment as ever to act side by side with all those who, in Portugal and elsewhere in the world, intervene with the aspiration and conviction that a just world, solidarity and of Peace is possible.