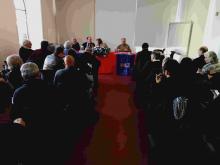 There are reasons to believe that the nuclear threat is, in the present, the most serious threat weighing upon human societies and the planet, our common home. The number of nuclear warheads, which during the “hottest” period of the cold war exceeded 60 thousand, has been substantially reduced since the 1980s. Today, the military arsenals of the nine nuclear powers include about 10 thousand nuclear warheads, about 4 thousand of which are operational and, among these, two thousand are maintained in high alert status, ready to be mobilized in a few minutes. The total explosive potential of the existing weapons is equivalent to about one billion tons of TNT (50 thousand Nagasaki bombs). The United States and the Russian Federation possess ninety percent of this nuclear arsenal. All nuclear powers, large and small, actively pursue the modernization or improvement of their nuclear arsenals. Five nuclear powers who ratified the Treaty on the Non-Proliferation of Nuclear Weapons (NPT) do so without formally disrespecting the treaty, as it does not prohibit such actions. But, in doing so, they oppose the path enshrined in Article VI of the NPT, namely a path that should lead, in a reasonable timeframe, to the prohibition of nuclear weapons and to general and complete disarmament, under international control. There has been no movement up until now in this direction by the nuclear powers who signed the NPT —on the contrary.

In this context, we underscore two aspects that mark the NPT. On the one hand, the NPT is discriminatory, as it confers rights upon the signing nuclear powers that it denies to states without such weapons. On the other hand, there is nothing in the treaty that delegitimizes the acquisition, development or possession of nuclear weapons by non-signing states. In the present geopolitical framework, a non-nuclear power that, with well-founded reasons, feels threatened by an aggressive nuclear power can simply withdraw from the treaty (or have already withdrawn), and then legitimately procure its own nuclear weapons. If this occurs, and it seems to, the probability increases that the dominating power in this two-sided conflict will resort to a nuclear weapon, risking the involvement of other nuclear powers and the inevitable fatal consequences for life on Earth.

Throughout the cold war, the possession of nuclear weapons was a factor of deterrence that allowed for a certain balance among opposing forces and avoided a generalized conflict. The balance was unstable and is today perhaps even more unstable. A conflict may erupt by accident or an error in the early warning system, which have occurred in the past. Certain political-military decisions by one party may serve to convince the other party of an imminent preemptive nuclear attack and lead it to react. There is no dearth of examples: the unilateral US decision to denounce the Antiballistic Missile Treaty (ABM Treaty), signed in 1972 with the Soviet Union; in recent years, the important reinforcement of NATO’s military means in the immediate land and sea borders of the Russian Federation and Popular Republic of China; the US’s ambitious plan of modernizing the nuclear component of its armed forces, involving not only nuclear explosives, but the three components of the so-called “nuclear triad”, i.e., the three components of a strategic nuclear arsenal capable of projecting nuclear warheads towards pre-selected targets. The triad components are land-based intercontinental ballistic missiles; strategic bomber planes; and submarine-based ballistic missiles. This program of modernization of military nuclear weaponry was initiated by Barak Obama, 2009 Nobel Peace Prize winner, and extends for an additional 30 years, with a total cost exceeding one trillion US dollars. The decision to start this program took place in 2016, nine years after Obama’s famous speech in Prague, when he stated that the US, “as the only nuclear power to have used a nuclear weapon”, had the moral responsibility to act towards global military denuclearization, and underscored “America’s commitment to seek the peace and security of a world without nuclear weapons”. He also affirmed the US would take concrete steps towards achieving this objective. We well know the path being followed today is exactly the opposite, one embraced unhesitatingly by Barak Obama’s successor. We don’t fear being disproven if we state the same would have happened with Hillary Clinton. In our understanding, US policy, in particular regarding defense, is commanded not by the White House but by the interests of the military-industrial complex, denounced by Dwight Eisenhower as a potential threat to US democracy. Meanwhile, we know the two other great nuclear powers, the Russian Federation and Chine, actively pursue the development of their military nuclear arsenals and means based on robotics and artificial intelligence.

The US program of military nuclear modernization was presented to the public as an effort to ensure the viability and security of existing operational nuclear weapons and not in order to introduce technical improvements aimed and increasing their power to destroy targets. This is not what is happening. Technical modifications were introduced based on new, revolutionary technologies that allow an important increase in the precision of US ballistic missiles.

According to Hans Kristensen, of the Federation of American Scientists, this “increase in capability is astonishing—boosting the overall killing power of existing US ballistic missile forces by a factor of roughly three—and it creates exactly what one would expect to see, if a nuclear-armed state were planning to have the capacity to fight and win a nuclear war by disarming enemies with a surprise first strike.”

We don’t doubt the desire for peace of the great majority of inhabitants of the planet, including the people of the US, and their common desire to prevent a nuclear war or that nuclear weapons are ever used again, even if in a limited manner, as in Hiroshima and Nagasaki. Evidence of this desire is given by the approval, last July, in the United Nations, of the Treaty on the Prohibition of Nuclear Weapons, the first judicially-binding international agreement that broadly prohibits nuclear weapons, aiming towards their total elimination. The Treaty was approved by the wide majority of United Nations members (120). There was one abstention (Singapore) and one vote against: the Netherlands, the only NATO country that decided to be present. All other NATO members and all powers that possess nuclear weapons were not represented. Sweden, who has partnership agreements with NATO, has had a favorable position towards the Treaty from the beginning and considers the possibility of signing it. Several NATO members who do not possess nuclear weapons, as well as Japan and Australia, have defended their refusal of the Treaty arguing that US nuclear weapons guarantee their safety. Others consider that the treaty, as an instrument leading towards the abolition of nuclear weapons, will be ineffective, defending that instead concrete steps be taken to implement Article VI of the NPT.

The Treaty on the Prohibition of Nuclear Weapons is open for signature and ratification since September 20th, 2017. On that day, 53 states signed the treaty and 3 others signed it afterwards. Meanwhile, to date only [five] countries have ratified. The signing is a mere statement of intent of becoming part of the treaty. Ratification is indispensable and in the terms of the Treaty it will only come into effect 90 days after ratification by 50 states. One of the three states to ratify was the Holy See.

On November 10th, World Science Day for Peace and Development, as instituted by UNESCO, in the Vatican, there was an International Symposium on Disarmament and Development. In the opening session, Francisco Bergoglio, stated that “existence of nuclear weapons creates a false sense of security that holds international relations hostage and stifles peaceful coexistence. (…)The threat of their use as well as their very possession is to be firmly condemned. (…) The policy of deterrence is no longer acceptable. (…)They exist in the service of a mentality of fear that affects not only the parties in conflict, but the entire human race.”

The vote for the definitive prohibition of nuclear weapons under international law, which took place at the United Nations headquarters last July 7th, should be lauded as a proclamation of a deep aspiration of Humanity to ensure life on Earth, contradicting the tyranny of the merchants of death wherever they be found. It is an historic step towards Peace, despite all the contradictions and obstacles that path faces.

As underscored by the “International Campaign for the Abolition of Nuclear Weapons” (ICAN), “weapons that are outlawed are increasingly seen as illegitimate, losing their political status and, along with it, the resources for their production, modernization and retention.”