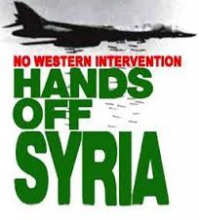 Numerous organizations and prominent leaders of the peace movement have signed on the Coalition’s Points of Unity statement and have agreed to cooperate within the framework of an Ad Hoc coalition named Hands Off Syria Coalition.

The World Peace Council has also endorsed this initiative.

U.S. Hands Off Syria
An Urgent Message for Peace on the Eve of Wider War

We raise our voices against the violence of war and the enormous pressure of war propaganda, lies and hidden agendas that are used to justify this war and every past U.S. war.

We, the undersigned organizations and individuals, endorse the following Points of Unity and will work together as an Ad Hoc Coalition to help put an end to the regime change intervention by the United States, NATO and their regional allies and the killing of innocent people in Syria:

The continuation of the war in Syria is the result of a U.S.-orchestrated intervention by the United States, NATO, their regional allies and reactionary forces, the goal of which is regime change in Syria.
This policy of regime change in Syria is illegal and in clear violation of the United Nations Charter, the letter and spirit of international law and the Universal Declaration of Human Rights.
This policy of forced regime change is threatening the security of the region and the world and has increased the danger of direct confrontation between the United States and Russia, with the potential of a nuclear catastrophe for the whole world.
War and U.S. and EU sanctions have destabilized every sector of Syria’s economy, transforming a once self-sufficient country into an aid-dependent nation. Half the Syrian population is now displaced. A UN ESCWA report reveals these U.S. sanctions on Syria are crippling aid work during one of the largest humanitarian emergency since World War II. The one third of Syrians refugees in surrounding Jordan, Lebanon and Turkey have been hit hard by U.S. cuts to UNICEF. This forces desperate refugees to struggle to reach Europe.
No foreign entity, be it a foreign government or an armed group, has the right to violate the fundamental rights of the Syrian people to independence, national sovereignty and self-determination. This includes the right of the Syrian government to request and accept military assistance from other countries, as even the U.S. government has admitted.
Only the people of Syria have the inalienable right to choose their leaders and determine the character of their government, free from foreign intervention. This right cannot be properly exercised under the conditions of U.S.-orchestrated foreign intervention against the Syrian people.
Our opposition is to forced regime change in Syria by U.S.-backed foreign powers and their mercenaries. It is not our business to support or oppose President Assad or the Syrian government. Only the Syrian people have the right to decide the legitimacy of their government.
The most urgent issue at present is peace and putting an end to the violence of foreign intervention that has resulted in the deaths of hundreds of thousands of people and the displacement of millions of Syrians both internally or as refugees abroad.
Based on these Points of Unity, we, as individuals and organizations—in an Ad Hoc Coalition—agree on the following demands and commit ourselves to working together to help achieve them:

An immediate end to the U.S. policy of forced regime change in Syria and full recognition and compliance by the U.S., NATO and their allies with principles of international law and the U.N. Charter, including respect for the independence and territorial integrity of Syria.
An immediate end to all foreign aggression against Syria, and serious efforts toward a political resolution to the war.
An immediate end to all military, financial, logistical and intelligence support by the U.S., NATO and their regional allies to all foreign mercenaries and extremists in the Middle East region.
An immediate end to economic sanctions against Syria. Massive international aid for displaced people within Syria and Syrian refugees abroad.
Only in a peaceful and independent Syria, free of foreign aggression, can the people of Syria freely exercise their sovereign rights, express their free will and make free choices about their government and their country’s leadership.

We invite all supporters of peace and peoples’ right to self-determination around the world to join hands of cooperation in this effort to achieve these most humanitarian demands.

We need jobs, healthcare, education and an end to racist police violence here at home, not U.S. wars abroad!!