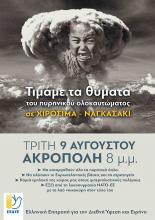 Seventy-one years have passed since the crime of the imperialist USA against the people of Japan, against the thousands of people in Hiroshima and Nagasaki whom the nuclear mushroom wiped off the face of the earth (6 and 9 August 1945). The material damages were enormous, with both of the US’s target cities levelled. The real targets were the peoples, the USSR, and the rising revolutionary and labour movement. To this day, imperialist propaganda is still trying to conceal the real targets, using the lie of “military necessity” to justify these crimes, when the imperialist World War II was already over!

We are currently going through an extremely dangerous period for the Greek people, and for all peoples of the earth. Intra-imperialist rivalries and conflicts are becoming more acute over the entire planet. Hotspots of war continue to exist in Syria, Libya, Iraq and Afghanistan, with the conflict in Ukraine and others being added. The very perilous role of NATO and the EU has also been demonstrated, as have their efforts to control resources and markets in competition with Russia and China.

The decisions of the recent NATO Summit in Warsaw (8 and 9 July) confirm the criminal nature of this imperialist organization, and reveal that the threat of a generalized confrontation is closer. They decided – in the presence of the SYRIZA-ANEL government – to deploy further forces on member states’ borders with Russia, to complete the installation of the “Missile Shield”, that the NATO presence in the Black Sea, the Aegean, Mediterranean and Baltic areas be made permanent and be reinforced. And that its military presence continue in Afghanistan, Iraq, the western Balkans, the Caucasus and North Africa. In announcing the conclusions, NATO and the EU, through cooperation and military coordination, declared their readiness to use nuclear weapons.

The responsibilities of the SYRIZA-ANEL government (and of the other bourgeois parties) are enormous because its policy is further deepening our country’s involvement in imperialistic interventions and wars, drawing our people into new adventures. At the same time, in a period of deprivation for the entire Greek people, it is devoting enormous sums to military spending in the context of NATO planning. EEDYE calls for mass participation in the demonstration on 9 AUGUST at the ACROPOLIS. Through our participation we will denounce decisively the imperialist crime in HIROSHIMA and NAGASAKI and honour the victims of this atrocity.
We are fighting for and we demand:
• No Greek involvement in imperialist plans and wars,
• That ALL nuclear weapons be abolished. That nuclear testing be prohibited,
• That all European and Atlantic bases and headquarters in Greece be closed,
• That all military forces taking part in NATO and EU operations return home,
• That Greece withdraw from the European Union and NATO so that its people can be masters in their own country.