Anti-imperialist and anti-NATO rally and march was held by EEDYE in the city of Chania/Crete, followed by a militant mass protest and march towards the US/NATO air base of Souda on Sunday 28th May 2017.

Upon the initiative of the branches of the Greek Committee for International Détente and Peace (EEDYE) on the island of Crete, a massive concentration and march was organized in the city of Chania on 28TH May, with the participation from all the four provinces/prefectures of the island, from Trade Unions, Students Associations the Federation of Greek Women. The Peace Committees of Crete mobilized many hundreds of demonstrators at the rally point in the center of the city of Chania where amongst others the President of the EEDYE Stavros Tassos and the Executive Secretary of the WPC Iraklis Tsavdaridis, spoke. A massive rally through the streets of Chania and its port was carried out under the slogans and demands: SHUT DOWN THE SOUDA BASE---NATO OUT OF THE AEGEAN SEA—DISENGAGEMENT FROM NATO&EU---NATO&EU ARE KILLING PEOPLES---NO CHANGE OF BORDERS---NO MILITARY MISSIONS OF GREECE ABROAD.

The initiative of EEDYE took place only few days after the NATO summit in which also the Greek government participated and where unanimously the decisions were taken for the formal involvement of NATO in the aggression in Syria, while all decisions of the previous NATO summit in Warsaw were ratified and further concretized, like the deployment of NATO troops in a belt from the Baltic Sea till Bulgaria, the installation of the “Missile Defense Shield” in Romania and Poland and the increased presence of NATO war ships in the Aegean Sea, the Mediterranean Sea and the Black Sea.

A solidarity message from the President of WPC, Socorro Gomes was read out in the rally along with the messages from the Cyprus Peace Council and the Peace Committee of Turkey.

The participants of the rally, one of the biggest of the last years, despite the heavy rain, moved to the AIR BASE OF SOUDA, where the US/NATO base was encircled and a petition was delivered to the Greek officer in charge, by which it was declared and demanded to shut down the Base and remove it. It is noteworthy that the SOUDA BASE has been used since the aggression of NATO in Yugoslavia, Afghanistan, Iraq, Libya, Syria. It is an Air Base and Naval base, from where US and NATO air fighters are refueling and starting their operations in the Middle East. During the recent US attack on Syria, the Souda base was used for the refueling of the US wars ships from where the Tomahawk missiles were launched.

SOUDA constitutes along with the British Bases in Cyprus and the US base in Incirlik a dangerous triangle, from where the imperialists are carrying out their attacks and c rimes against the peoples of the neighborhood. 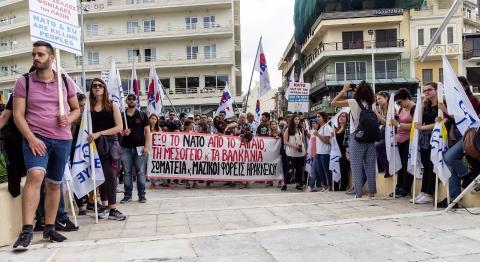 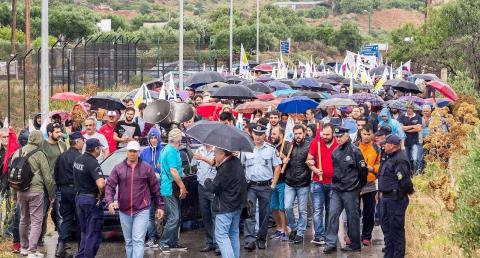 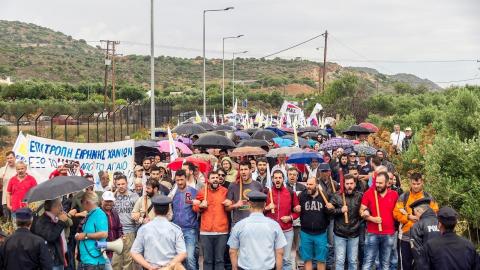 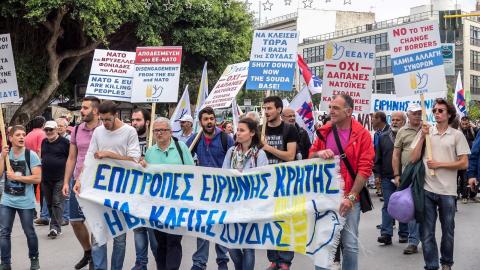 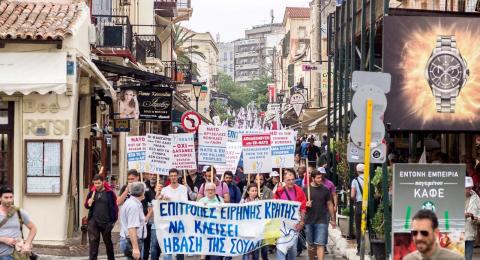 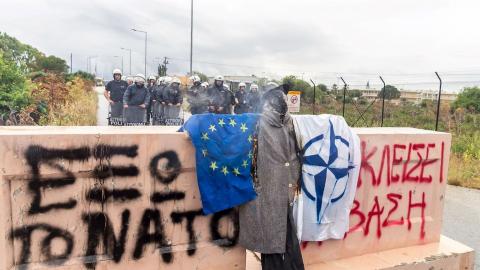 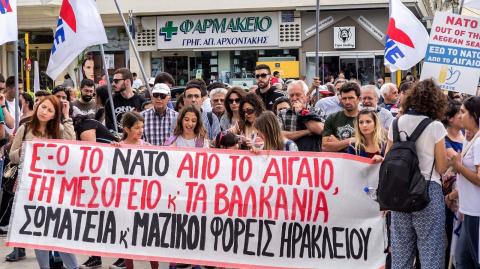 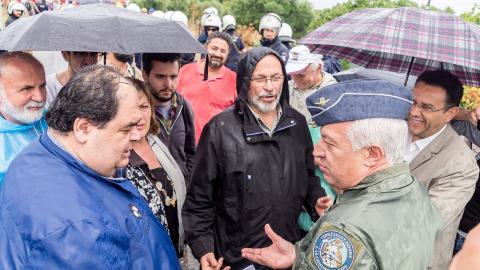